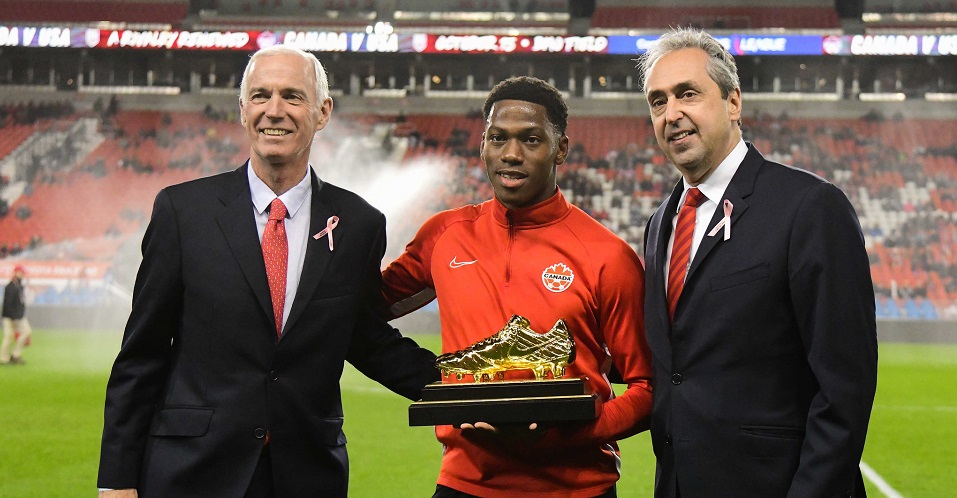 Jonathan David from Ottawa, Ontario has joined Lille OSC on a record-breaking transfer deal with KAA Gent. The record $46.5 million Canadian (more than €30 million) from Lille OSC to KAA Gent is the highest-ever transfer fee paid for a Canadian soccer player.

David, still only 20 years old, was the 2019 Canadian Player of the Year after a record-breaking year with Canada and KAA Gent. He broke Canada Soccer’s Men’s National Team record for international goals in a season (eight) and was the third Canadian to win the Concacaf Gold Cup Top Scorer award after Carlo Corazzin in 2000 and Alphonso Davies in 2017.

“I’m very happy. I’ve been looking forward to this day and it is a pleasure to become a ‘Dogue’ with Lille OSC,” said Jonathan David. “I know the project that is in place at Lille OSC from the President, Luis Campos and Christophe Galtier. We have a very good team with good players. I want to play and progress and I believe Lille is the perfect place for me. I am a player that knows where to be on the pitch and I love playing to my abilities, most notably technique and speed. I look forward to meeting the supporters: let’s go LOSC!”

David capped his 2019-20 season with KAA Gent by co-winning the Jupiler Pro League top goalscorer award in Belgium alongside Dieumerci Mbokani (18 goals). Across all competitions, he scored 23 goals in 40 matches for KAA Gent and was named the club’s Player of the Year. In all, he played 83 matches for KAA Gent across two seasons and scored 37 goals.

David joined Canada Soccer’s youth program in 2015, the same year he was the top goalscorer in the Ontario Youth Soccer League. He represented Canada at the 2017 Concacaf Under-17 Championship and a just over year later made his Men’s National Team debut on 9 September 2018, also becoming the youngest Canadian to score his international “A” debut (he scored twice in the first half). From just two years at the international “A” level, David has already scored 11 goals and 5 assists in just 12 matches.