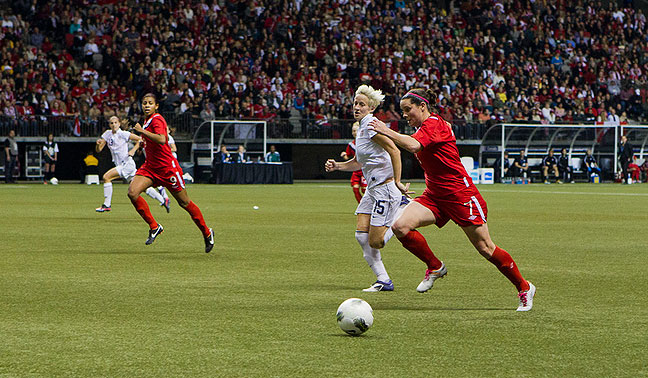 Canada gained 10 points on the most recent FIFA/Coca-Cola Women’s World Ranking, holding onto the seventh spot in the quarterly global ranking. The ranking, published on 1 June, includes Canada’s international matches from late March – a win over Brazil and a loss to Sweden.

The FIFA/Coca-Cola Women’s World Rankings looks at each country’s international results from the last four years. The ranking takes into account the result, the importance of the match, the strength of the opponent, the regional strength, the time period, and the number of matches per year. The ranking comes out four times a year.

Canada remains the second-ranked team in CONCACAF behind the world’s number-one ranked USA. Canada is currently preparing for the London 2012 Women’s Olympic Football Tournament, which runs 25 Julu to 9 August. Behind USA, the other top-six countries with 2,000 or more points are Germany, Japan, Sweden, Brazil and France. Canada is seventh with 1,981 points (40 points behind France), followed by Korea DPR (1,970), England and Australia.

Of note, the most recent FIFA/Coca-Cola Women’s World Ranking did not include Canada’s Wednesday victory over China PR, a 1:0 win in Moncton, NB. The next ranking will be published on 17 August 2012 after the Women’s Olympic Football Tournament.