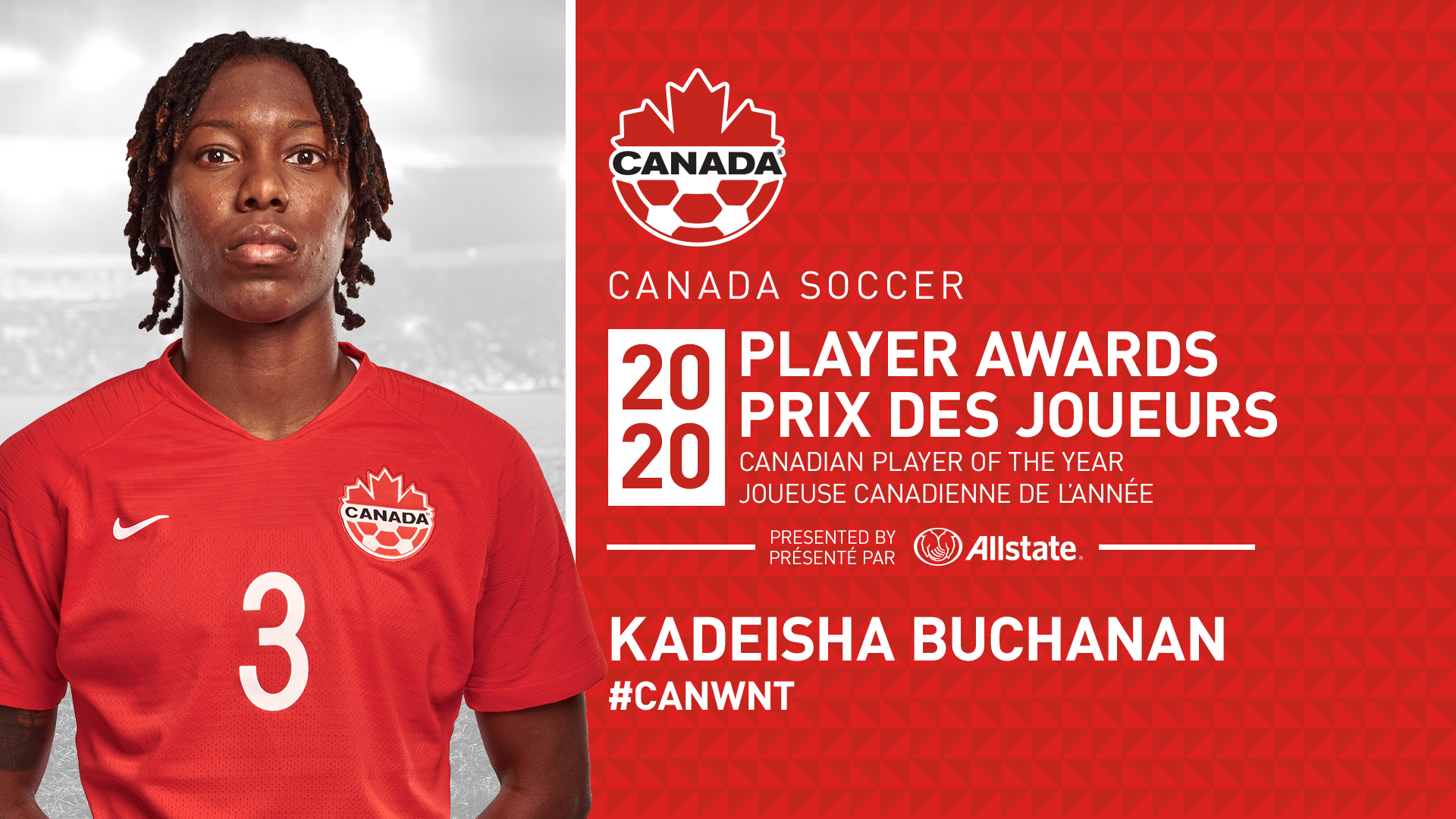 Kadeisha Buchanan from Canada Soccer’s Women’s National Team has been named the 2020 Canadian Player of the Year presented by Allstate. Buchanan wins the national award for the third time in six seasons after a year in which she helped Canada qualify for the Olympic Games and she won three trophies with her club Olympique Lyonnais including UEFA Women’s Champions League.

Buchanan was named to the Best XI at the 2020 Concacaf Women’s Olympic Qualifying Championship in February when Canada qualified for their fourth consecutive Olympic Games and won a Concacaf medal for the ninth consecutive tournament. In France, Buchanan won her fourth UEFA Women’s Champions League title, her fourth Championnat de France (the league title), and her third Coupe de France (the domestic cup). She also a year-end nominee for the UEFA Team of the Year.

Buchanan from Brampton, Ontario was honoured from a vote shared by Canadian media and Canadian coaches. Buchanan shares the 2020 Canadian Players of the Year Award presented by Allstate with co-winner Alphonso Davies from Canada Soccer’s Men’s National Team.

“For Kadeisha to have played an integral part in her fourth UEFA Champions League speaks to one of her many accomplishments and contributions to both club and country in which she should be very proud,” said Bev Priestman, Canada Soccer’s Women’s National Team Head Coach. “It has been a fantastic season for Kadeisha and it has been great to see her performances and the goals she has scored, too.

“She has world-class qualities that any country would be proud to have and she is a highly-valued member of the squad both on and off the pitch, so we are thrilled for her personally in receiving this well-deserved recognition. As a team, to know you have a centre back that opposing forwards hate to play against, it fills the group with confidence.”

With Canada in 2020, Buchanan featured in six international “A” matches from January through March before the global pause in football because of the Covid-19 pandemic. She earned Canada’s Player of the Match honours against USA in the Final of the Concacaf Women’s Olympic Qualifying Championship, which was also her milestone 100th international “A” match. She also had an assist in the match against Mexico and she was named the Canada Soccer Player of the Month for February.

Buchanan won her second Canada Soccer Player of the Month honour in August after she helped Olympique Lyonnais win the 2019-20 UEFA Women’s Champions League title on 30 August 2020 in San Sebastián, Spain. From January through November, she featured in 17 club matches and scored three goals and was a major part of the team’s 20-match unbeaten streak across all League, Cup and UEFA competitions from 12 January through 13 November (which in its entirety ran 73 undefeated matches across three seasons starting on 26 August 2018).

As part of the 2020 Canada Soccer Player Awards, Tajon Buchanan and Jade Rose were named Canadian Youth International Players of the Year while Mohamed Farsi was named Canadian Futsal Player of the Year. Maxime Crépeau, meanwhile, was named the 2020 winner of the Allstate Canadian National Teams Good Hands Award.