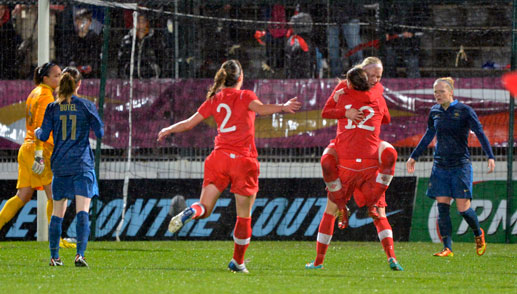 It was a tale of last-minute heroics as Canada and France traded goals at the end of each half in a 1:1 Women’s International Friendly match. France thought for sure it had a winner with an Élodie Thomis goal at the end of the first half, but Kaylyn Kyle cancelled it out with her tying goal on the last play of the match.

The Canada-France international was the first match between the two sides since the London 2012 Women’s Olympic Football Tournament – a memorable match in which Canada capture the bronze medal after a last-minute goal by Diana Matheson. That last encounter was top of the mind for both clubs, even though France was equally focused on the upcoming European Championships in Sweden.

“As the half went on in the second half, you could see that confidence started to grow,” said Canadian head coach John Herdman. “Once that momentum was built, people started performing at the level that they can. I have to say, I was really impressed with the last 30 minutes.”

Canada’s goal scorer Kaylyn Kyle had several chances in the last 30 minutes, including a pair of headers that were cleared off the line. In the end, there was no mistake on her chance in the 94th minute as she put it past the French goalkeeper for the 1:1 draw.

As it was against France at London 2012, goalkeeper Erin McLeod was Canada’s player of the match. The 4 April 2013 match was played in front of 5783 fans at the Stade Municipal du Ray in Nice, France.