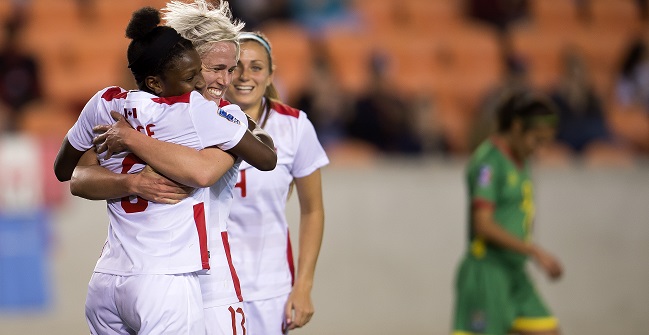 At the opening whistle, Winnipeg’s Desiree Scott joined the century club, marking 100 international appearances for Canada. Deanne Rose scored twice in the first half, earning her first and second women’s national team goals, and Ashley Lawrence opened the second half with two goals in one two minutes, before finishing the game with a rare hat-trick.

“It’s awesome to get 100 caps and I’m just excited I’m able to rep this jersey and get 100 games under my belt,” said Scott. “I think the future is bright. We have the young ones getting on the score sheet,  with their speed, their athleticism and fearlessness. I think it’s going to be awesome mixing that with the veterans and the experience we bring, and I think we will improve moving forward.”

In a match that saw Canada take 30 shots on net, without a single response from Guyana, the team spent much of the match working on passing plays and crossing the ball in from the wings against a highly defensive-minded opponent. Canada held possession for 81 per cent of the game and completed 460 passes with an 89 per cent accuracy rate.

”We were going into this game looking to impose ourselves on them and make them play our style of game. I think we did that today,” said Head Coach John Herdman. “When an opposition team packs ten players into a twenty by twenty area it’s not easy, but these girls did well to score three goals in the first half and put the game to bed, so they could just enjoy it in the second.”

Deanne Rose, the 16 year old striker from Alliston, ON made her first appearance for Canada at a major senior international tournament, putting two past Guyana’s keeper. Starting alongside veterans Sinclair and Matheson on the front line, Rose was integral in building momentum as the team drove to the net again and again throughout the first half.

“I’m really excited,” said Rose after the match. “I wanted to score, but it was really exciting (to get two). It’s always great to score for my country.”

The GTA’s Ashley Lawrence earned player of the match honours after scoring once in the first half and opening the second with two goals in the first two minutes.

“It’s a surreal feeling, and I am happy that we were able to get that performance in and start off on a good note,” said Lawrence.

Lawrence, whose three goals were her second, third and fourth at the senior international level, also expressed her excitement about the team and Rose’s debut performance.

Herdman, who played all three of Canada’s teenage players against Guyana, has spoken about how the group stage is a critical phase in the development of the squad as they look to build towards the all-important semi-final match which will determine whether Canada earns a spot at the Rio Olympics this summer. Canada’s next match will take place on Valentine’s Day against Caribbean Football Union champions Trinidad and Tobago.

“For the young players, it gives them confidence to get that first game out of the way because it can be quite nerve-wracking,” he said. “This team has not played consistently together since the world cup. We had a couple of games in Brazil, but it wasn’t a consistent line up and we were missing some key players, so to get them back on the pitch together is great – there is a really good spirit out there – and I think they’ll be ready for Trinidad.”

Looking forward to the next match, Herdman said he expects to see more attacking from Canada’s next opponent.

“I think it will be a completely different type of game,” said Herdman. “Trinidad and Tobago opens it up a bit more, particularly in the counter attack they will send four or five players forward. It demands a different approach and they are a genuine threat. What we know about Trinidad and Tobago is if you don’t get your tactics right they can hurt you.”

While Canada is already looking forward to the next CONCACAF Women’s Olympic Qualifying hurdle, Herdman took a moment to appreciate Thursday’s win.

“It was nice to give some new players new opportunities, to see Ashley score a hat-trick, and Desi get her 100th cap,” he said. “It was a good night for us.”