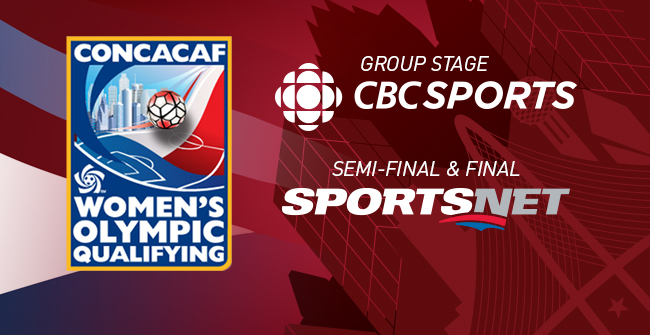 Canadians can catch all of Canada’s group matches on cbcsports.ca or via the CBC Sports App for iOS and Android; knockout round will be broadcast live on Sportsnet ONE

Canadians will have the opportunity to follow LIVE and cheer along Canada’s Women’s National Team when they compete at the CONCACAF Women’s Olympic Qualifying Championship Texas 2016 from February 11 to 21 in Houston, Texas.

“Canada Soccer is pleased to have both CBC Sports and Sportsnet provide live coverage of our Women’s National Team on their Road to Rio,” stated Canada Soccer General Secretary, Peter Montopoli. “We know that Canadians from coast to coast followed the team on their emotional journey in capturing the bronze medal at London 2012 and we look forward to the team opening a new chapter in their Olympic storybook.”

CBC Sports will carry each of Canada’s group stage matches and Sportsnet will broadcast Canada’s knockout matches, including the all-important semi-final match in which Canada will look to secure its spot at this summer’s Rio Olympic Games.

“As Canada’s Olympic Network, we are committed to connecting Canadians with the athletes and teams on their journey to proudly wearing the maple leaf at the Rio 2016 Olympic Games,” said Greg Stremlaw, executive director, CBC Sports, and general manager and chef de mission for CBC / Radio-Canada’s coverage of the Rio 2016 Olympic Games. “That connection has already begun through our Road To The Olympic Games program and we have extended the exclusive viewing opportunity to our digital platforms with the live drama of the Women’s National Soccer Team’s Olympic Qualification.

Sportsnet will carry each of Canada’s knockout round matches on Sportsnet ONE. Canada will progress to the knockout round by placing first or second in Group B and would then compete on February 19th in the semi-finals. A victory in the semi-final match ensures Canada a spot in Rio later this summer, and also a spot in the CONCACAF final on February 21st. Exact broadcast times of any Canadian knock out matches will be determined during the group stage. Sportsnet’s live coverage will include live play by play on Sportsnet ONE.

Canada will play its entire tournament at BBVA Compass Stadium in Houston, which will also host Group B, the knockout round and final match.

Canada will be looking to secure its spot at this summer’s Olympic Games through a victory in the semi-final knockout round, and if successful will have the opportunity to take home CONCACAF’s top spot with a victory in the final. Canada has twice qualified for the Olympics through the CONCACAF Women’s Olympic Qualifying Championship, each timing defeating Mexico in the semi-final to earn their Olympic berth, before being defeated by the USA in the final match. Canada went on to place eighth in 2008 Beijing Olympics and won bronze at the London 2012 Games.