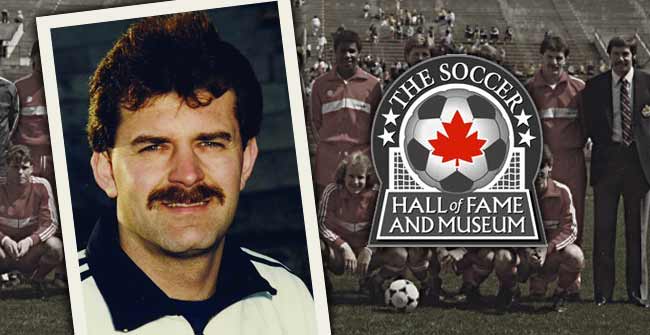 The Canadian Soccer Hall of Fame and Museum is proud to announce that Marc Rizzardo will receive the Brian Budd Award at the 2014 Induction Banquet.

The Brian Budd Award recognizes those who have excelled in both soccer and in another endeavour. The candidate must exemplify good character, show outstanding dedication, achievements and leadership in developing soccer in Canada and provide inspiration to past, present and future generations.

Rizzardo has been selected for his outstanding achievements both in soccer and as a highly regarded physiotherapist in Canadian sport.

During his playing career Rizzardo was a member of the University of British Columbia Thunderbirds who won the coveted Canadian National Championship in 1974.

After his university soccer career was done, he then played for the North Shore Pegasus who competed against such teams as the Vancouver Whitecaps and the Seattle Sounders.

Throughout the years, he coached soccer at youth levels, as well as college and university teams. During his four decades in Canadian soccer, he has participated at all national levels. He has acted as lead and chief therapist with many of the Canadian Medical Teams including: the 2008, 2010 and 2012 Olympic Games, as well as being a member of the Canada Soccer Medical Committee.

Rizzardo’s involvement in Canadian sport does not stop with soccer. He is the current Integrated Sport Team lead for Badminton Canada, was the therapist for the 2001 Fencing World Championships and acts as a National Examiner for Sport Physio Canada.

Throughout his remarkable career Rizzardo has provided outstanding professional service to the Canadian sporting community and exemplifies the characteristics of the Brian Budd Award – character, professionalism and dedication.

Brian Budd, with a storied club career, also represented Canada seven times, scoring twice in FIFA World Cup qualification. He became a well-known soccer broadcaster working as a colour commentator for the Toronto Blizzard in 1982 and later a charismatic analyst on The Score’s Footy Show.

More information on the Induction Class of 2014 is available at www.thesoccerhalloffame.ca.

The Hall of Fame Induction Banquet will be held at Chateau Le Jardin Conference and Event Venue on 9 November, 2014.

For more information about tickets to the Induction Banquet please visit www.thesoccerhalloffame.ca or contact Robyn Gmeindl at 905-264-9390 ext. 230 or gmeindl@soccer.on.ca.