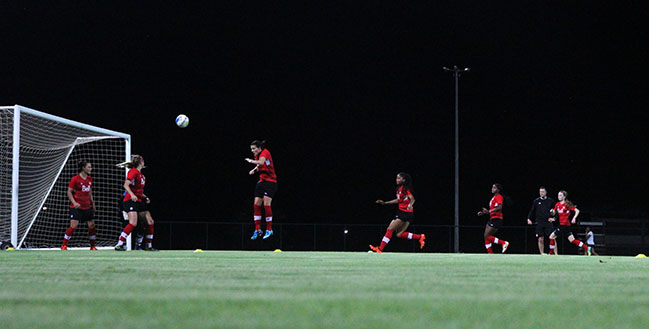 Canada’s Women’s National Team will play Trinidad and Tobago, one of the three teams it will face in the group stage of February’s Olympic qualification tournament.

Canada’s Women’s National Team will play Trinidad and Tobago, one of the three teams it will face in the group stage of February’s 2016 CONCACAF Women’s Olympic Qualifying Tournament. The match is Sunday 13 December at the 2015 International Tournament of Natal at Arenas das Dunas in Brazil.

Head Coach John Herdman has said that every player will get pitch time this tournament and will likely play some of the youngest players on his roster against the Women Soca Warriors. Though he is using this friendly competition as an assessment period, he expressed his view that Sunday’s match against Trinidad and Tobago would not be a laidback experience for Big Red.

“We know Trinidad and Tobago have been tough opposition for teams,” he said. “They were narrowly beaten by USA in the opening game of the FIFA Women’s World Cup Qualifiers 1:0, narrowly beaten by Mexico in extra time, and took Costa Rica to the last couple of minutes. So we know athletically and defensively they are strong and quick.”

The Canadian squad won their opening match against Mexico 3:0. Captain Christine Sinclair found he back the net twice, putting her on the cusp of tying retired USA player Mia Hamm for second on the all-time goal scoring list for women’s international soccer. A third goal came from Nichelle Prince, a blossoming star in her own right.

While Canadian fans will be sure to be looking for Sinclair to get one between the sticks, and match if not elapse Hamm on Sunday, Herdman was cautionary in his pre-match remarks. “If we play like we did tonight (against Mexico), I am not sure we we’ll find the back of the net that often. So it’s a different style and approach we need.”

Trinidad and Tobago are coming off a grueling week against USA. Their first match was canceled by USA, while their second ended in a 6:0 defeat. The Trinidad and Tobago squad has been divided as they try to juggle their games against USA, so the tournament in Natal, fielding several reserve players in Natal in their 11:0 loss to home team Brazil.

Without knowing exactly what Trinidad and Tobago team Canada will face on Sunday, Herdman remains convinced it will be a challenging match.

“It will be a tough; every team here gives you something a bit different,” he said. Mexico hit us on the transition and the Trinidadians will be pretty quick, and that’s what we will have to deal with. They are a different type of team – very athletic.”

Canada rounds out the group stage against Brazil on 16 December, before the third place and Final Match on 20 December.

Follow @CanadaSoccerEN on Twitter for live tweets of the match, and visit Canadasoccer.com for highlights and post-match reactions.