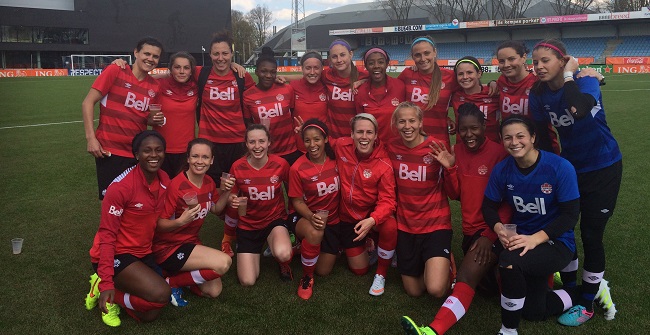 Canada Soccer and TSN will provide LIVE coverage of the match starting at 10:00 ET/07:00 PT on CanadaSoccer.com, and to TSN subscribers via TSN Go.

The clash will be the first meeting of the two sides since a 1-1 draw before a crowd of 45,420 in the third group stage match of the FIFA Women’s World Cup Canada 2015™ in Montreal.

Getting experience against tough European teams is key to Herdman’s plan as Canada continues preparations for the 2016 Rio Olympics.

“Tactically the Dutch are very well organised and they’ve been in good form with some excellent results since last summer. We expect it’s this type of team we will meet at the Olympics,” said Herdman. “Our last game against them showed us that this will be a battle. Young players like Lawrence, Buchanan and Fleming played in that match in Montreal, under the pressure of a FIFA Women’s World Cup on home soil, so they have good experience but players like Deanne Rose will face the Netherlands for the first time.”

In last summer’s match Ashley Lawrence scored her first international goal for Canada in the 10th minute and second-half Dutch substitute Kirsten Van de Ven responded in the 87th minute to secure both teams entrance in the knock out round. The Netherlands succumbed to finalists Japan in the Round of 16 before Canada went on to a sixth place finish, bowing out in the quarterfinals against England.

Herdman will be using last summer’s FIFA Women’s World Cup Canada 2015™ experience against the Netherlands as he organises the squad for Sunday’s match.

“That experience is important and what I like about it is that in the training environment they refer back to those experiences and when planning to play against the Dutch they already have things in their minds that they want to try differently,” he said.

Coming off Canada’s first ever victory at the Algarve Cup, Herdman is looking for another strong result in the lead up to two home matches against Olympic hosts Brazil in June before the team heads into the Olympic Games.

“This match gives us an important test to see if we can carry on the result from the Algarve Cup,” added Herdman. “Playing well will help us continue building confidence and momentum going into the home matches and on to Rio.”

The Netherlands narrowly missed out on qualification for Rio 2016 after tying Sweden in the final match of the UEFA qualifying tournament. Sweden went on to join Germany as the two European sides vying for Olympic glory.

Sunday’s International Friendly will be followed by a closed-door training match on Tuesday, April 12th. Two days later, Canada will find out who it will face in the group stage at the 2016 Rio Olympic Games when the Rio Olympic Football Tournament 2016 draw takes place at Maracanã stadium in Rio de Janeiro on April 14th, 2016 at 10:00 local time (09:00 ET/06:00 PT).

Canada’s Women’s National Team will take on Olympic hosts Brazil in a two game series as both team prepare for this summer’s 2016 Rio Olympic Games. The first match will take place Saturday, June 4th at BMO Field in Toronto, and second on Tuesday, June 7th at TD Place in Ottawa.