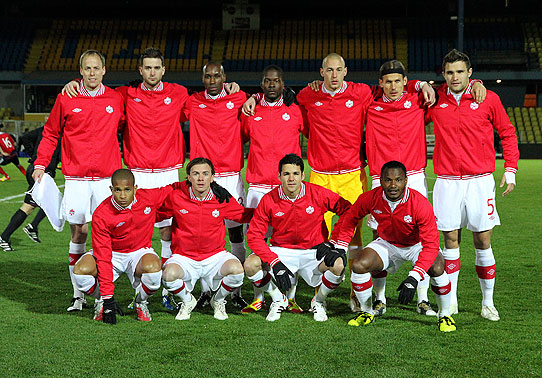 It was a goal scored, but three conceded in Canada’s first international match of the 2012 season. Canada lost 1:3 to Armenia in an away Men’s International Friendly match played at Tsirio Stadium in Limassol, Cyprus. Kevin McKenna scored for Canada before Marcos Pizzelli scored a brace and Aras Özbiliz scored on a late penalty in favour of the Europeans. The match was played on the first FIFA International Date of the 2012 calendar season.

Broadcast live on Sportsnet One, Canada opened the season wearing its new white Umbro kit, unveiled earlier in the month at a special launch event in downtown Toronto, ON. The new design coincides with the Canadian Soccer Association’s 100th anniversary.

As expected, the Armenia side showed plenty of speed in the come-from-behind victory.

Canada opened the scoring in the fifth minute on the first corner kick of the match. Julian de Guzman crossed the ball into the middle of the box where captain McKenna was well positioned to jump in the air and head it past the goalkeeper for a 1-0 lead.

Armenia scored its equaliser in the 23rd minute after some sustained pressure in the Canadian end. Striker Pizzelli fired the long, low shot from outside the box into the right corner of the net.

Pizzelli scored his second goal in the 66th minute, giving Armenia the 2-1 edge it was chasing. The goal actually followed a great defensive play by Canada’s David Edgar, in which an off-angle Yura Movsisyan thought he had a shot on an open net before Edgar blocked the attempt. From the resulting corner kick, however, there were several attempts in the box before one shot hit the crossbar and then the rebound was put in by Pizzelli.

Finally near the end of the match, Armenia’s Artur Sarkisov went down in the Canadian box and the referee called for a penalty kick. Özbiliz took the kick and scored for a definitive 3-1 lead.

Canada’s starting XI featured Milan Borjan in goal, Adam Straith at right back, David Edgar and Kevin McKenna at centre back, Mike Klukowski at left back, and Nik Ledgerwood, Julian de Guzman, Tosaint Ricketts, Simeon Jackson, Josh Simpson, and Atiba Hutchinson from the midfield up to the attack.

Armenia coach Vardan Minasyan made three changes of his own in the second half. He switched Movsisyan with Artur Sarkisov (72′), Henrikh Yedigaryan with Arthur Yuspashyan (77′), and Levon Hayrapetyan for Kamo Hovhannisyan (90’+2).

Canada’s all-time record under coach Hart remains positive, with an overall record of 16 wins, eight draws and 13 losses in 37 matches. Of note in the match, Hart featured Simeon Jackson for an 18th consecutive appearance for Canada. Jackson has the longest active streak and now also the eighth-longest streak all-time in national team history.

As for McKenna, he scored the 11th goal of his international career, moving him into a tie with soon-to-be-inducted The Soccer Hall of Fame honoured member Carlo Corazzin for seventh place on the all-time national list.