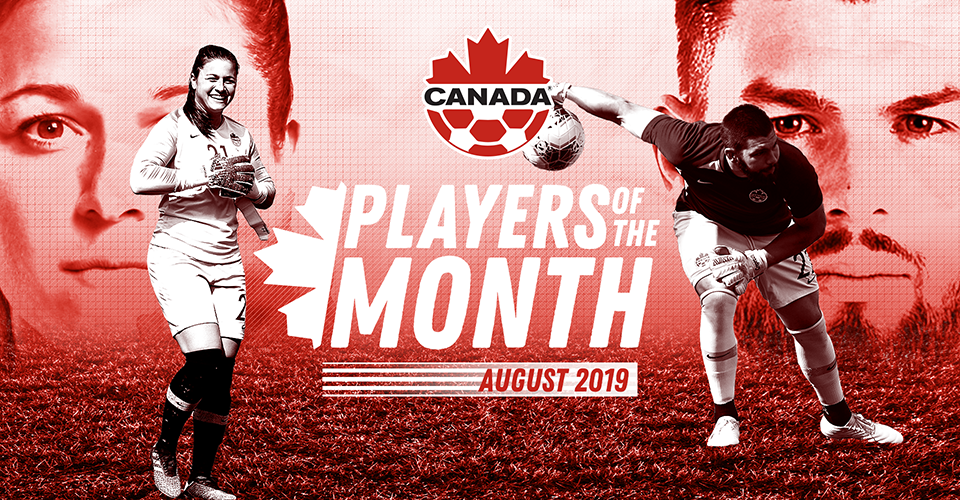 Maxime Crépeau and Sabrina D’Angelo have been named Canada Soccer’s Players of the Month for August 2019. The two Canadian goalkeepers excelled during the month with […]

Maxime Crépeau and Sabrina D’Angelo have been named Canada Soccer’s Players of the Month for August 2019. The two Canadian goalkeepers excelled during the month with Crépeau setting an MLS record with Vancouver Whitecaps FC and D’Angelo proving to be one of the best in the Swedish league with her club Vittsjö GIK.

Crépeau of Candiac, Québec made 34 saves in six Major League Soccer appearances, including a single-match record 16 saves on 24 August against San Jose Earthquakes. He made another seven saves just four days later in his return to Montréal to face his former team the Impact. As always, it was the quality of some of Crépeau’s saves that made the highlight reels, with perhaps his best a top-corner save against Maxi Urruti in the 28 August match at Stade Saputo.

D’Angelo of Welland, Ontario posted four clean sheets in five matches during the month of August as Vittsjö GIK jumped into third place in the Swedish Damallsvenskan, just four points back of the league leaders FC Rosengård. Going back to 26 July, D’Angelo has posted six clean sheets in her club’s last seven matches.

Also of note from the month of August, Canadians Alphonso Davies and Milan Borjan were drawn into the same Group B for 2019-20 UEFA Champions League (FC Bayern Munich will host Red Star Belgrade on 18 September) while Scott Arfield, Jonathan David and Atiba Hutchinson were drawn into separate groups for the upcoming 2019-20 UEFA Europa League campaign. In the NWSL, Christine Sinclair helped Portland Thorns FC open a five-point lead in the league standings while Desiree Scott helped Utah Royals make a big jump into fourth place.

In the month of September, Canada Soccer’s Men’s National Team will open camp on Monday 2 September ahead of a pair of Concacaf Nations League matches against Cuba, with the home match at BMO Field on Saturday 7 September and the away match on Tuesday 10 September in George Town, Cayman Islands. Canada Soccer’s Women’s National Team, meanwhile, will open their camp on 30 September ahead of an away international match against Japan, the former FIFA Women’s World Cup champions and Tokyo 2020 Olympic hosts.