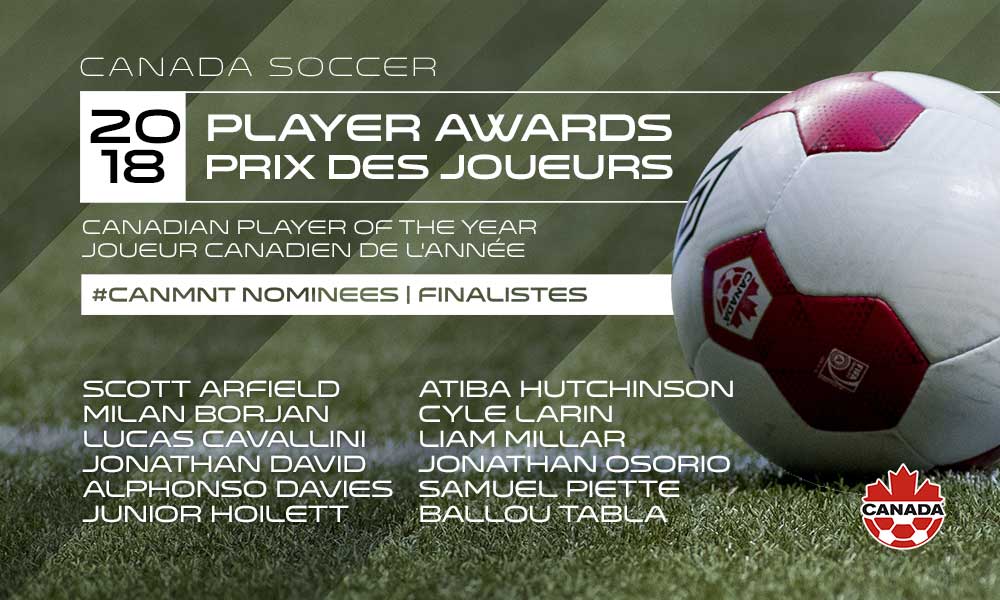 Atiba Hutchinson | TUR / Beşiktaş JK
Atiba Hutchinson made two appearances for Canada in 2018, including his milestone 80th international match away in November when he scored the winning goal and earned Man of the Match honours. At the club level, he continued to star for Beşiktaş, including a Round of 16 appearance in 2017-18 UEFA Champions League.

Cyle Larin | TUR / Beşiktaş JK
Cyle Larin scored three goals in four matches for Canada in 2018, including two goals in a record 8-0 win over US Virgin Islands in September. He joined Beşiktaş midway through the 2017-18 season and also featured in 2018-19 UEFA Europa League. He scored a hat trick in less than half an hour on 19 May.

Liam Millar | ENG / Liverpool FC U-23
Liam Millar earned Man of the Match honours in his international debut in March and then recorded an assist in his second match in September. At the club level, he played for Liverpool FC’s U-23 team in UEFA Youth League. He also played and scored in Premier League 2 Division One and Premier U-18 League.

Samuel Piette | CAN / Impact de Montréal
Samuel Piette played three international matches for Canada in 2018, all three of which were victories. At the club level, he played in all 34 MLS matches and recorded three assists from the midfield. He was also named Québec Soccer Player of the Year for the 2018 season.

Ballou Tabla | ESP / FC Barcelona B
Jean-Yves Ballou Tabla made his first two international appearances for Canada in 2018, including an away start in St. Kitts and Nevis. At the club level, he played for FC Barcelona B and recorded an assist in both 2017-18 and 2018-19. He also played in the UEFA Youth League in 2017-18.