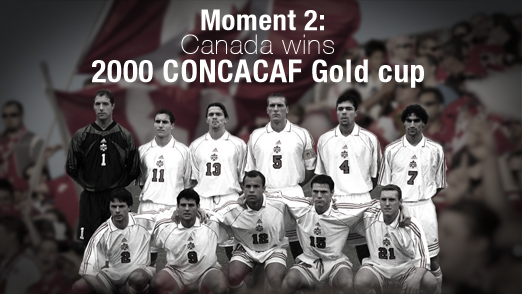 In 2000, Canada won its second confederation title, winning the CONCACAF Gold Cup to qualify for the FIFA Confederations Cup Korea/Japan 2001. Undefeated in five matches, Canada famously defeated Mexico on a quarter-final golden goal before knocking off Trinidad and Tobago in the semi-final phase and Colombia in the championship final. After draws against Costa Rica and Korea Republic in the opening two matches, Canada won its first elimination match in fine fashion on 20 February after Richard Hastings scored two minutes into extra time. Canada then won its next two matches 1:0 and 2:0 before captain Jason de Vos lifted Canada’s second CONCACAF trophy.

One year after Canada’s confederation win, Canada participated in the eight-team FIFA Confederations Cup, finishing seventh overall after a draw and two losses in the group phase. Canada lost 0:3 to Japan, drew 0:0 with Brazil, and then lost 0:2 to Cameroun. Defender Jim Brennan was selected a tournament all-star. As it turns out, the tournament would prove to be the swan song for Forrest’s international career, who made his 56th and final appearance on 4 June 2001.