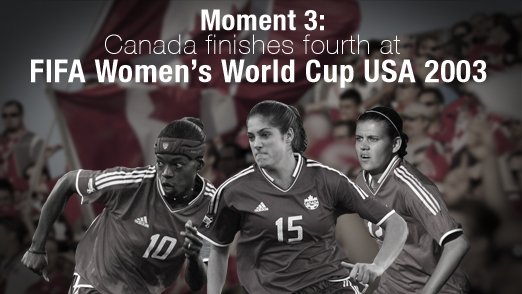 Canada made its mark on the international scene by reaching the semi-final stage of the FIFA Women’s World Cup USA 2003. After escaping the group stage, a young Canadian squad shocked the defending silver medal winners from four years earlier with a 1:0 quarter-final win. The win over China PR vaulted Canada to a fourth-place finish, although heart-breaking losses to Sweden and USA followed in the last two matches of the tournament.

After a loss to eventual-champion Germany, Canada capped off the group phase with wins over Argentina and Japan. In the knock-out quarter final, Canada won 1:0 on the strength of a Charmaine Hooper goal, assited by Diana Matheson on the counter attack. Remembered Matheson many years later, “our defence was amazing. I remember seeing the clock at 70 minutes and just knowing that they weren’t going to score for the rest of the game. It was just one of those games where we were just not going to let them score.”