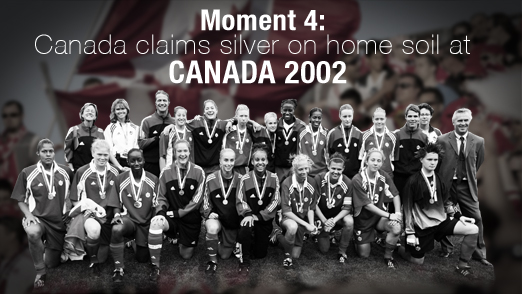 In 2002, the Canadian Soccer Association hosted the first-ever FIFA U-20 Women’s World Cup, then known as the FIFA U-19 Women’s World Championship. After a 10-week tour in which Canada posted nine wins in nine communities across six provinces, Canada opened the FIFA U-20 Women’s World Cup with a 3:2 victory over Denmark. After closing a perfect group stage with wins over Japan and Nigeria, Canada then blasted by England in the quarter-final phase with five goals scored by the tournament’s eventual Golden Ball and Golden Shoe winner, Christine Sinclair. After then eliminated Brazil on kicks from the penalty mark in the semi-final, Canada had its heart broken in the championship final against USA: with a record 47,784 in attendance at Commonwealth Stadium in Edmonton, Lindsay Tarpley’s extra-time goal was the difference in a memorable final.

In terms of player legacy, Canada’s silver-medal youth team supplied 12 players to Canadian teams at the CONCACAF “A” level, including 10 of which have participated in a FIFA Women’s World Cup. Seven of those players are currently chasing a spot on Canada’s team for the London 2012 Women’s Olympic Football Tournament. That “silver seven” features Sinclair, Melanie Booth, Candace Chapman, Robyn Gayle, Erin McLeod, Carmelina Moscato and Brittany Timko.