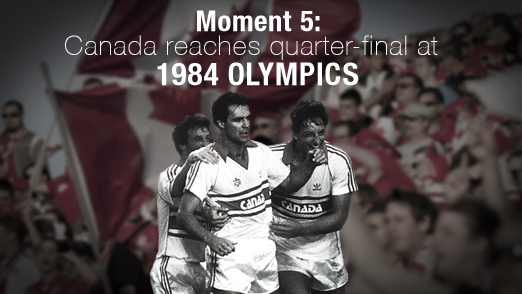 Canadian team finished fifth after elimination by Brazil on kicks from the penalty mark.

Four years after being knocked out by Bermuda in Olympic Qualifying, Canada made no mistake in kicking off what would be its best Olympic run in modern football history. Starting with a 6:0 victory over Bermuda on 8 May 1983, Canada steadily made its way through CONCACAF by posting four wins, three draws and just one loss in a 12-month qualifying campaign. The run included a 1:0 victory over Mexico at Royal Athletic Park in Victoria, BC, with Craig Martin scoring the lone goal for Canada’s newly-hired coach Tony Waiters.

After booking its spot in April 1984 (again in Victoria), Canada then headed east to play its Olympic group matches in Cambridge, MA. Starting with a 1:1 draw against Iraq (with a goal by Gerry Gray), Canada then lost 0:1 to Yugoslavia before blasting past Cameroon with a 3:1 win (with two goals by striker Dale Mitchell). The record of one win, one draw and one loss put Canada in the quarter-final against Brazil, with the match to be played across the country in Palo Alto, CA just three days after Canada’s final group match. Despite the travel, Canada nearly got the better of Brazil, taking a 1-0 lead in the 58th minute courtesy a Dale Mitchell goal in front of 36,150 fans at Stanford Stadium. After Brazil scored in the 72nd minute and neither side could find the back of the net for 30 minutes of extra time, the match was finally decided on kicks from the penalty mark: Brazil 4, Canada 2.

By finishing fifth at the Los Angeles 1984 Olympics, Canada posted its best result in a men’s senior football tournament. The result was the start of more good things to come for Canada’s national teams: under coach Waiters, 16 of Canada’s 1984 Olympians were also part of Canada’s run to the 1986 FIFA World Cup in Mexico.