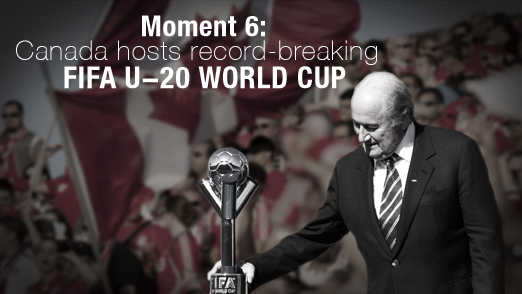 The Canadian Soccer Association’s hosting of the FIFA U-20 World Cup Canada 2007 was a defining moment in the history of sport in Canada. The event drew a record-setting crowd of 1,195,239 total spectators over the course of the 52-match event. With broadcast transmitted to 157 countries worldwide, it attracted a global television audience of 469.5-million cumulative viewers. The total economic impact across all six host cities, meanwhile, was $259-million. There was no question that the event turned out “huge,” in many ways beyond everyone’s great expectations. Just before the final, an Angus Reid Poll reported that one third of all Canadians watched at least one tournament match on television (the poll was taken midway through the tournament) and that interest in the game of soccer had increased 8% nationally through hosting the FIFA U-20 World Cup.

All in all, the tournament has provided a lasting legacy for soccer in Canada. Beyond the countless new fans and inspired players, as well as a blossoming interest from corporations to support the sport at all levels, it was the FIFA U-20 World Cup that paved the way for the creation of BMO Field, the country’s first soccer-specific national stadium. That new infrastructure, of course, led to the revival of professional soccer in Canada, including Toronto FC’s debut in 2007, the creation of the Amway Canadian Championship in 2008, and the elevation of Vancouver Whitecaps and Impact Montréal to first-division clubs in Major League Soccer, and the participation of Canada’s champion club in CONCACAF Champions League.