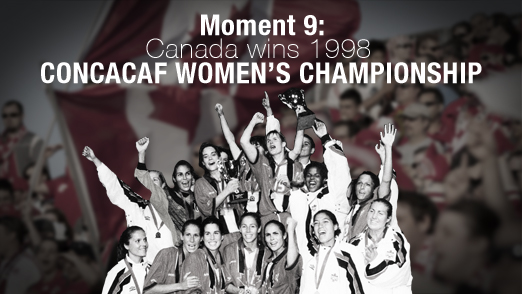 Canada won its first of two CONCACAF women’s championships on 6 September 1998 with a 1:0 win over Mexico in Etobicoke, ON. Having already qualified for the FIFA Women’s World Cup USA 1999 two days earlier, Canada completed the competition with a perfect 5-0 record and a new trophy for the showcase. The match was played in front of a sold-out crowd of 4,971 fans at Centennial Stadium.

This marked the second time that Canada qualified for a FIFA Women’s World Cup, a string that will reach six consecutive appearances in 2015 when Canada hosts the next edition in six cities from coast to coast. Back in 1998, the stars of the Canadian team included Charmaine Hooper, Silvana Burtini and Amy Walsh, while goalkeeper Nicole Wright posted five clean sheets as the woman in goal. Also of note, the tournament featured out-going legend Geraldine Donnelly (who left international football after USA 1999) and rookie Karina LeBlanc (who as a teenager was the back-up goalkeeper to Wright).