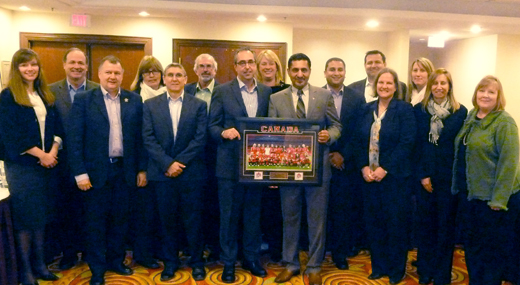 This week, the Honourable Bal Gosal, Minister of State (Sport), participated in a strategy session hosted by the Canadian Team Sports Coalition in Ottawa. The Minister spent much of the morning with the leaders of 15 National Sports Organizations representing team sports for an engaging discussion about the unique challenges facing team sports in Canada.

In addressing the group, Minister Gosal spoke about the distinct benefits of team sports within the Canadian Sports System. “Team sports teach our kids important life skills such as cooperation, sacrifice, discipline and working together for a common goal,’ said Minister Gosal. “The Government of Canada is proud to continue to invest in strengthening team sports in Canada, which make a powerful contribution to elite and community sport participation.”

Ahmed El-Awadi, Executive Director of Water Polo Canada and Chair of the Canadian Team Sports Coalition, thanked the Minister for his participation and on-going support for team sports. “Each of us know how busy this Minister is having welcomed him to so many of our national and international events across the country,” said Mr. El-Awadi. “We thank him for taking the time to not only share with us the government’s vision for strengthening sport development in Canada but also for recognizing the important role of team sports in the social, physical and athletic development of so many Canadians.”

As an expression of appreciation on behalf of the entire Team Sports Coalition, the General Secretary of the Canadian Soccer Association Peter Montopoli presented the Minister with a framed picture of the Canadian Women’s Olympic Bronze Medal winning soccer team. In thanking the Minister for his support Mr. Montopoli commented that: “This bronze medal was a team victory shared with Canadian communities from coast to coast to coast, a true demonstration of the power of team sport.”

The Canadian Team Sports Coalition was founded to raise awareness of the importance of team sports and to collaborate on common issues and opportunities. The group’s published research report, Full Team Ahead: The Benefits of Team Sport to Canadian Sport, reveals that seven of the top 10 most popular sports (based on participation) are team sports and that team sports play an important role in building communities and in socializing young Canadians.

The large majority of Canadians who participate in sport do so as part of a team. In terms of overall involvement through participating, volunteering and attending events, 24 million Canadians are engaged in some manner in team sports.