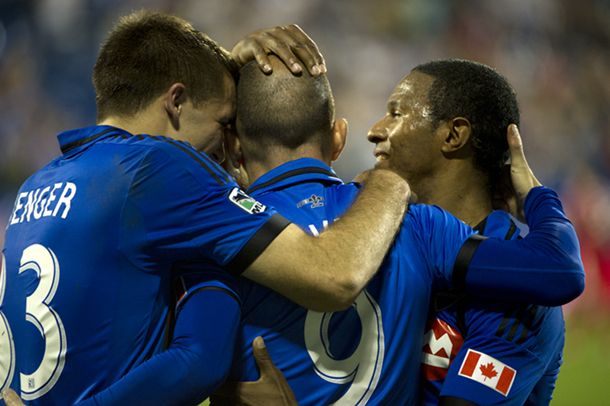 Toronto seemed eager to put this semi-final away early in the match when Robert Earnshaw saw his attempt roll passed Montreal’s keeper Evan Bush only to hit the post and deviate out of bounds.

Slowly but surely Marco Shällibaum’s men have built pressure and turned the match around. Andrew Romero got passed defender Ryan Richter on the left side of the box before crossing it to Justin Mapp who directed it in the lower left corner for the goal (24’).

Less than 10 minutes later, Daniele Paponi put the Impact up by two, scoring on a rebound following a shot by Mapp. The goal also meant Montreal was back in the semi-final series.

Paponi left the match at the 38th minute, replaced by Marco Di Vaio, who scored the first of his two goals of the night on a perfectly placed cross by Justin Mapp in the box and beat Toronto’s keeper Stefan Frei to his left. Half time score was then 3-0.

Montreal needed another goal to comfortably avoid a comeback from Toronto FC, and actually managed to add three by the end of the match. Romero connected with Marco Di Vaio on a nice give and go at the 61th to beat Frei.

Di Vaio added to his night’s box score at the 90th minute when he jumped on a return following a shot from Mapp to make it 5-0. Andrew Wenger completed the goal avalanche on a long ball behind Montreal’s defense to close the night at 6:0.Match Highlights: Impact Montréal 6:0 Toronto FC (6:2 on agg.)

The 6:0 score makes Montreal Impact the new record holder for the biggest win in Amway Canadian Championship, record formerly held by Toronto FC who had defeated Montreal 6-1 in 2009.

At halftime, the Reds replaced Bekker and Wiedeman by Jeremy Hall and Luis Silva. Ashton Bennett came on at the 74th minute to replace Osorio.

Montreal Impact will now compete in the 2013 Amway Canadian Championship final on 15 and 29 May against the winner of the Vancouver Whitecaps FC and FC Edmonton semi-final.