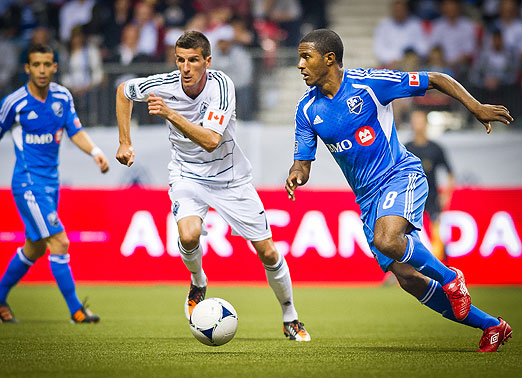 New foreign footballers to watch this coming May in Canada.

From 2-23 May, the four Canadian teams will participate in the 2012 Amway Canadian Championship. The tournament runs on four consecutive Wednesday nights, with the home-and-away semi-final legs on 2 and 9 May (Edmonton against Vancouver and Montréal against Toronto) followed by the home-and-away championship legs on 16 and 23 May. The winner not only emerges as Canada’s champion, but also stands to represent Canada in 2012-13 CONCACAF Champions League.

VANCOUVER WHITECAPS FC: SÉBASTIEN LE TOUX & LEE YOUNG PYO
An original member of expansion clubs Seattle Sounders FC in 2009 and then Philadelphia Union in 2010, Le Toux joined his third MLS club for the 2012 season. The 28-year old French striker scored 25 goals in the past seasons with Philadelphia, including 14 goals in 2011. In his first match with the Whitecaps in 2012, Le Toux scored in the fourth minute against the expansion Impact.

Lee, meanwhile, made his North American debut with the Whitecaps this season. The 34-year old Korean fullback represented his country at three FIFA World Cups, including the most recent edition in South Africa in 2010. At the professional level, Lee has played in Korea Republic, Netherlands, England, Germany and Saudi Arabia.

FC EDMONTON: SÉRISAY BARTHÉLÉMY & JONATHAN JOSEPH-AUGUSTIN
Barthélémy joined FC Edmonton after six seasons with SC Bastia in the French second division. The 28-year old French striker previously played for AS Saint-Étienne. Barthélémy signed with FC Edmonton during the 2012 pre-season and has already found his way onto the scoresheet for several exhibition matches.

Joseph-Augustin is in his first North American season after playing in France, Belgium and Netherlands in Europe. The 30-year old French defender most recently played for AS Moulin in France. At the international youth level, Joseph-Augustin represented France at the FIFA U-20 World Cup Argentina 2001.

TORONTO FC: TORSTEN FRINGS & RYAN JOHNSON
Frings joined Toronto FC last season, but only after the completion of the 2011 Amway Canadian Championship. As such, the FIFA World Cup bronze medal winner will make his debut in the Canadian circuit this year. Injured at the start of the 2012 MLS season, he has been used at either centre back or in the midfield. The 35-year old German is expected to be back in the Toronto lineup by May.

IMPACT MONTRÉAL: DONOVAN RICKETTS & BERNARDO CORRADI
Ricketts has been one of the best goalkeepers in Major League Soccer these past few seasons, including his Best XI & Goalkeeper of the Year award-winning 2010 campaign. The 34-year old Jamaican goalkeeper spent three seasons with the Los Angeles Galaxy before joining the Impact via the MLS Expansion Draft. The MLS Cup champion is a four-time CONCACAF Gold Cup participant.

Corradi was a Coppa Italia champion with Lazio in 2004. The 35-year old Italian striker is new to North America after spending most of his professional career in Italy. Along with a stints in Spain (Valencia) and England (Manchester City), Corradi played for Cagliari, Chievo, Inter, Lazio, Parma, Reggina and Udinese.