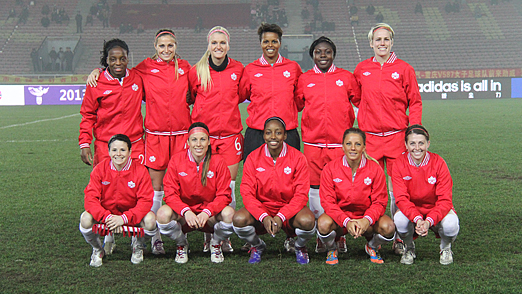 Canada’s Women’s National Team were defeated 1:3 by Korea Republic in the second match of the 2013 Yongchuan Cup in Yongchuan, China.

Canada’s Women’s National Team were defeated 1:3 by Korea Republic in the second match of the 2013 Yongchuan Cup in Yongchuan, China.

Nichelle Prince scored her first senior goal in the 77th minute to pull one back for Canada – but it wasn’t enough after going down 0-3.

Head Coach John Herdman had stated heading into the camp that Canada could drop results as it integrates young players and a new style of play, and the loss to Korea followed that narrative.

“It’s a setback if you look at the result, but there were some really good things performance-wise,” said Herdman.

“The players worked hard and looked to develop the game through possession as we’ve asked.”

Canada slides down to third place in the four-team round-robin tournament after the loss.

Canada are still in contention to win the tournament if they can defeat Norway in the team’s final match on 16 January.

China PR will take on Korea Republic on the same day.