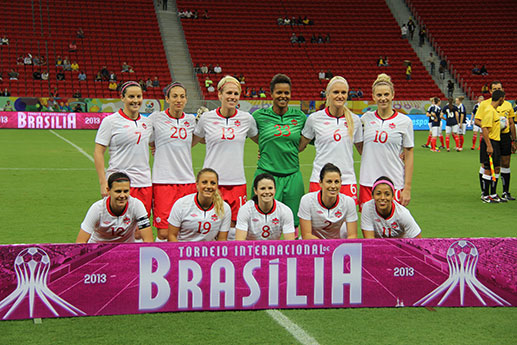 Not Even a Missed Penalty Could Spoil Sinclair’s Night

Leon and Sinclair scored in the win against Scotland

In a game that will be known for Christine Sinclair making her 200th appearance for her country, Canada’s Women’s National Team put out what was probably their top performance of 2013.

Canada looked comfortable from start to finish and was rarely troubled by the Scottish team on a hot, humid night in Brasilia, BRA as Canada came away as 2:0 winners.

Adriana Leon got Canada off on the right foot within the first ten minutes with a volley into the corner and from there the rest was an assured performance by a team that’s looking to head into 2014 with momentum.

“They were fantastic tonight,” said Head Coach John Herdman. “A really solid night tonight and I’m proud of the players. A month and a half of work and they came through. If this was the first round of the World Cup, I’m sure Canada would be happy.”

Sinclair had to wait until the second half to get her goal on her special night when she was played in alone on goal on the left side and coolly put away her chance.

She had a chance to get one sooner but after winning a penalty late in the first half but in what is a rarity for her, it was saved and Canada went into the dressing room up a goal.

“I’ve missed a few. It happens,” she said with a smile. “I think it’s my third or fourth miss with the national team. John (Herdman) said ‘you didn’t want to score with a penalty anyway, you wanted a real goal.’”

Next up for Canada is a game against Chile on Sunday.