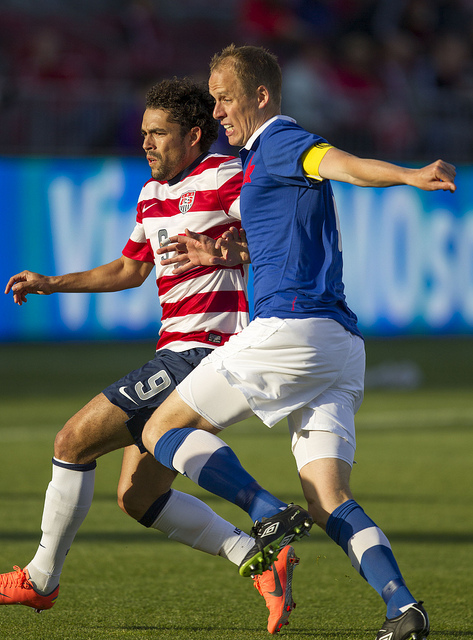 The Canadian Soccer Association is pleased to recognize Kevin McKenna and Erin McNulty as the Canada Soccer Players of the Month for November 2012.

In November 2012, McKenna scored in three-straight victories as FC Köln posted three wins, one draw and one loss in five German 2.Bundesliga matches. McKenna made five appearances, but was a starter in the three victories and one draw. He headed home first-half goals in the 2:0 victory over 1860 München on 16 November, the 3:1 win over VfL Bochum on 23 November, and the 1:1 draw with Hertha BSC on 29 November.

McKenna has been a member of Canada’s national team since 2000. He has taken part in one FIFA Confederations Cup, four cycles of FIFA World Cup Qualifiers, and five editions of the CONCACAF Gold Cup. Now 32 years old, the Calgary-born centre back was just 20 years old when he made his debut for Canada on 27 May 2000. He has made 63 appearances at the international “A” level.
As for McNulty, she helped Penn State University reach the 2012 NCAA National Championship for the first time in school history. On 30 November, McNulty was in goal for the big 2:1 a.e.t. victory over Florida State University. En route to the month-end heroics in the NCAA Tournament, McNulty posted a 4:0 win over LIU Brooklyn on 10 November, a 5:2 win over Boston College on 16 November, a 1:1 a.e.t. draw / 3-2 win on kicks over Michigan on 18 November, and a 1:0 win over Duke on 23 November.

McNulty has been in the national program since 2004 when she made her debut at a women’s national U-15 camp that visited Charlottetown, Moncton and Halifax. Before year’s end, she was the second-youngest player on Canada’s U-19 team at the FIFA U-20 World Cup Thailand 2004, serving as the team’s third goalkeeper. Over the next four years, she represented Canada at both the CONCACAF Women’s Under-20 Championship and FIFA U-20 Women’s World Cup in 2006 and 2008. She helped Canada win a CONCACAF youth title in 2008. At the full national level, she got her first invite to the “A” team in February 2009.