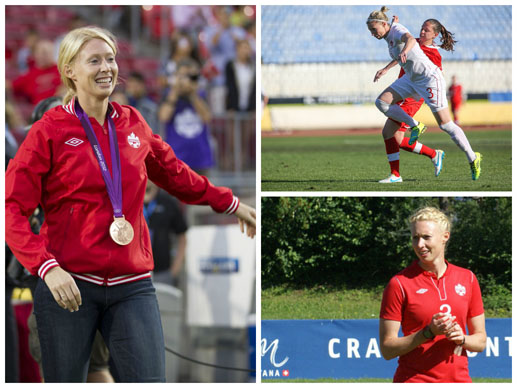 After 65 appearances for Canada’s Women’s National Team, veteran defender Melanie Booth has decided to call it a career and announced on Wednesday her retirement as an active soccer player from international and club duty.

After 65 appearances for Canada’s Women’s National Team, veteran defender Melanie Booth has decided to call it a career and announced on Wednesday her retirement as an active soccer player from international and club duty.

“This was a very difficult decision to make, mostly because it meant leaving the people that I’ve been with for so long, day in and day out,” said Booth. “It’s not an easy thing to do, but it just felt like it was my time to move on.”

Booth, a 29-year-old native of Burlington, ON, made her debut for Canada at the age of 17 on 1 March 2002 and was involved in the squad for many of their major achievements. She was a member of the team that won the silver medal at the FIFA U-20 Women’s World Cup Canada 2002 and also won silver medals at the 2002 and 2006 CONCACAF Women’s Gold Cup.

“Melanie has been a lon standing servant to the women’s national team programs,” said Canada’s Women’s National Team Head Coach JohnHerdman. “I’m blessed to have had the chance to work with someone with that level of character. She is loved by this team and I know we all miss her.”

But easily the greatest achievements of her career came over the past two years as she first was a member of the gold-medal winning team at the 2011 Pan-American Games in Guadalajara, MEX. She was then initially listed as an alternate on the roster for the 2012 London Olympics, but due to injuries on the roster, Booth was added to the team. Though she never featured at the 2012 Olympics in London, she stood on the podium with a bronze medal around her neck at Wembley Stadium after that famous 1:0 win over France.

“Her performances in the 2011 Pan Am Games and the 2012 CONCACAF Olympic Qualifying tournament were stand outs in my time,” added Herdman, “but it is the way she provided constant motivation and energy to her teammates through the 2012 London Olympics that I’ll remember most.”

“I’ve been through lots of ups and downs in my career. I am proud of myself for continuing to fight,” added Booth. “I am so thankful to have been part of that group and that team.”

After playing for the University of Florida Gators at the college level, Booth started her club career with the Toronto Lady Lynx. Among her other stops were the Vancouver Whitecaps and, most recently, Sky Blue FC of the National Women’s Soccer League.

She sat out the 2006 collegiate season due to commitments with the Canadian program, but Booth returned to Gainesville, FLA and graduated with a bachelor’s degree in applied physiology and kinesiology in 2008.