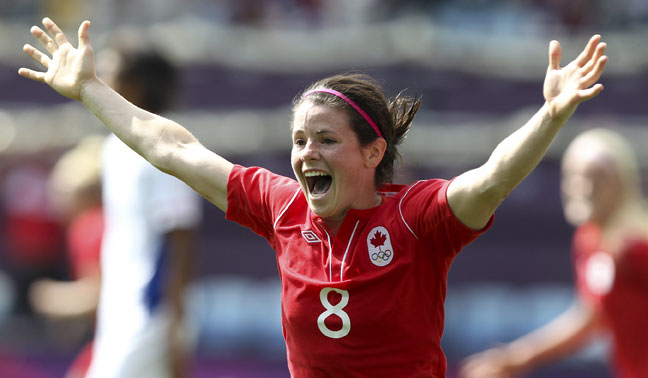 One year ago today: Bronzed!

A look back at one of the most defining moments in the history of Canadian soccer.

Friday 9 August, 2013 marks the one-year anniversary of one of the most defining moments in the history of Canadian football.

With precious seconds left in the Olympic bronze-medal match at London 2012, an exhausted Canada WNT team mounted one final attack at the City of Coventry stadium against a French team that had pounded Canadian ‘keeper Erin McLeod’s goal with opportunities since the opening whistle.

Having endured a physically and emotionally shattering semi-final loss to the Americans – Canada could have been forgiven for holding its shape and waiting for extra time as the clocked ticked past 90 minutes in the tournament’s third-place match against the French – but somehow, from somewhere, the Canadians mustered up the energy to send numbers into the box.

And so they came forward.

Christine Sinclair, Sophie Schmidt, Kaylyn Kyle, Brittany Timko, Diana Matheson and even left-back Lauren Sesselmann pushed into the box – as remarkably Canada mounted its most dangerous attack of the game in the 92nd minute.

Sinclair settled the play, and eventually the ball found its way to Matheson. Matheson in turned played it to Schmidt. Schmidt side-stepped a defender, let fly on a shot – and suddenly – Matheson found herself, unmarked, glaring at an open goal upon collecting the rebound only 9 yards from goal.

The rest, as they say, is history.

Matheson stroked a side-footed volley. Kyle dove to the ground – clearing the way to goal for Matheson’s strike. And as Rhian Wilkinson hoisted the diminutive Matheson up onto her shoulder in celebration – a nation rejoiced.

Canada WNT had won the country its first-ever Olympic medal in football –and it’s first medal in a tradition team sport at the summer games since 1936.

History. And a moment to live long the in the memory.