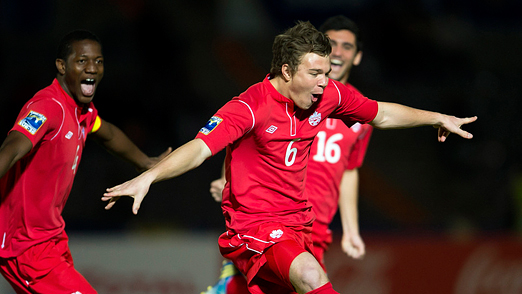 During the last CONCACAF Gold Cup Samuel Piette and Keven Aleman watched Canada’s games from Pachuca, Mexico as they prepared for the FIFA U-17 World Cup.

This time around, things will be a little different.

Huddled around a television in a Pachuca hotel room in 2011, Canada’s U-17’s watched the country’s senior stars do battle in the confederation championship – now, only two years later – Piette and Aleman find themselves stepping onto the biggest stage in CONCACAF football.

“We were with the Canada U-17 team in Mexico, watching all of these guys on TV. So for me to be here now is pretty special,” said Piette.

“Two years is a short time, and to be here with these guys means a lot to me,” added Aleman.

CANMNT: From U-17 to the MNT, Piette and Aleman

The pair of midfielders were key figures in the team that helped Canada record its first-ever point at a FIFA U-17 World Cup.

The young Canadians notched a memorable 2:2 draw against heavyweights England courtesy of a stunning late equalizer by goalkeepr Quillan Roberts.

The team nearly qualified for the knock-out stages, but could only manage a draw against Rwanda on the final day of group play when a win would have sent them through.

Despite the disappointment at not progressing further in the tournament – the young Canadians left Mexico with their heads held high.

“It was the best experience of my life, “ said Piette.

The early success at the international level has propelled both players to big things in their young careers.

Piette has soared through the Canadian ranks – in 2012 featuring for the U-20 and U-23 sides, as well as the Men’s National Team – his dynamism and composure catching the eye of then-manager Stephen Hart.

The young Québécois midfielder earned a notable senior debut in June 2012 when he came on against USA in Canada’s Centennial friendly.

The Repentigny, QC native has also won a spot with the youth team at German Bundesliga side Fortuna Dusseldorf.

Aleman, meanwhile, has excelled on his own path.

Noted for his instinctive left foot, Aleman went on to feature for Canada at the U-20 level before becoming only the second Canadian player to sign a professional contract in Spain’s La Liga with Real Valladolid.

Canada arrived in Los Angeles on Friday after completing its training camp in Oxnard, CA.

The team will kick-off its Gold Cup campaign, taking part in the opening match of the tournament on Sunday against Martinique (14.30 local kick-off). The match will be televised in Canada on Sportsnet World (17.30 ET / 14.30).