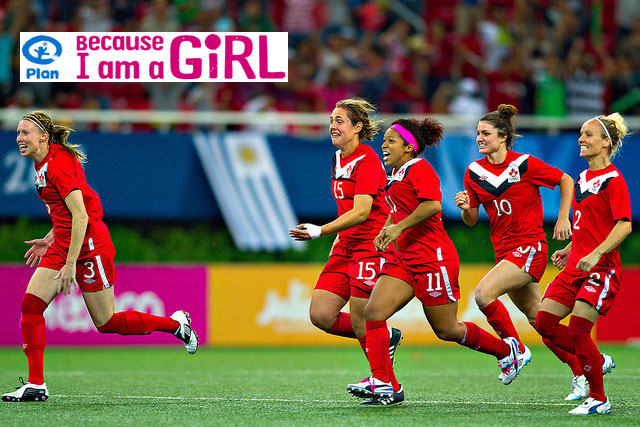 It is with great excitement that Plan Canada and the Canadian Women’s National Soccer Team announce the team’s support for the Because I am a Girl initiative.

It is with great excitement that Plan Canada and the Canadian Women’s National Soccer Team announce the team’s support for the Because I am a Girl initiative.

Canada’s Women’s National Soccer Team is demonstrating their commitment to girls’ issues and rights by wearing magenta (the Because I am a Girl pink) headbands and shoelaces on the field with hopes of drawing attention to the cause and inspiring others to take part. “The game of soccer is an incredible vehicle to share the message that girls and women can be strong agents of social change. Over 320,000 girls play soccer in Canada and as role models to young people, I feel strongly that by supporting Because I am a Girl, we can have a positive impact on girls both on and off the soccer field,” said Christine Sinclair, Captain, Canadian Women’s National Team.

“It is an exciting time as we kick off our programs empowering Canadian girls to support access to sport globally. We are extremely proud to have members of the Canadian Women’s National Soccer Team as celebrated ambassadors for Because I am a Girl. Everyone at Plan Canada wishes the women the best of luck at the CONCACAF Olympic Qualifying tournament in Vancouver January 19-29, 2012. Go Canada!” said Paula Roberts, Executive Vice President, Marketing and Development at Plan Canada.

The Canadian Women’s National Soccer Team is also fundraising to support equal access to sport programs for girls in Colombia. The project is called “Football for Peace”. Football is used as a way to teach tolerance, reconciliation and mutual respect in a country afflicted by almost five years of civil war. It has been shown that sport leads to real change, particularly in the area of girls’ education, both getting and keeping girls in school. In the communities where “Football for Peace” has been implemented, the number of violent gangs has diminished significantly, girls have gained self esteem and life skills and the community at large is more respectful of their rights.

“The Canadian Soccer Association is incredibly proud of the Canadian Women’s National Soccer Team for taking the initiative to support girls’ rights and issues globally through Plan Canada’s Because I am a Girl initiative. These women compete with teams from around the world and have seen first hand the impact that soccer has on the lives of girls. They are taking that awareness and sharing it with Canadians to make a difference,” said Peter Montopoli, General Secretary, Canadian Soccer Association.

Canadian supporters can help The Canadian Women’s National Soccer Team make this fundraising dream a reality by making a $25 donation which will help to open the doors for youth to realize their true potential.

Plan Canada encourages all Canadians to learn more and continue supporting girls through the Because I am a Girl initiative by visiting www.plancanada.ca or www.becauseiamagirl.ca, making a donation or fundraising for the initiative, and joining the conversation on Facebook and Twitter. Canadians can also show their support by taking part in the celebration of the first International Day of the Girl Child on October 11, 2012.

About Plan and the ‘Because I am a Girl’ Initiative

Founded in 1937, Plan is one of the world’s oldest and largest international development agencies, working in partnership with millions of people around the world to end global poverty. Not for profit, independent and inclusive of all faiths and cultures, Plan has only one agenda: to improve the lives of children. Because I am a Girl is Plan’s global initiative to end gender inequality, promote girls’ rights and lift millions of girls – and everyone around them – out of poverty. Visit www.plancanada.ca and www.becauseiamagirl.ca for more information.

Canada’s Women’s National Team finished the 2011 season with a record 14 wins, four draws and six losses. Canada is competing in the 2012 CONCACAF Women’s Olympic Qualifying tournament taking place in Vancouver, BC from 19-29 January at BC Place Stadium. The Canadian squad and seven other CONCACAF nations will fight for two available tickets to the London 2012 Women’s Olympic Football Tournament.