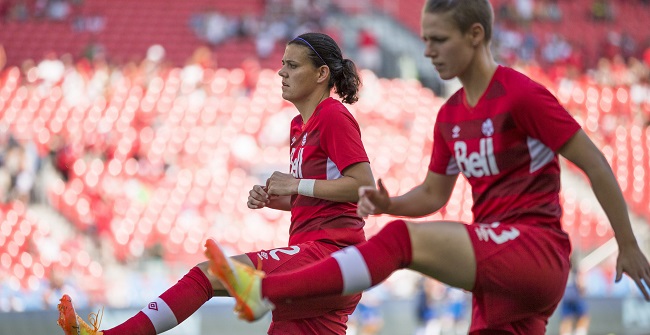 In a fitting final test before heading to Brazil for the Rio 2016 Olympic Games, Canada’s Women’s National Team will face France at Stade de l’Abbé-Deschamps in Auxerre, France, Saturday LIVE on CBC at 14.45 ET / 11.45 PT. In a re-match of the London 2012 match that saw Canada Soccer reach the Olympic podium for the first time, the much younger, remodeled Canadian side will have to be at its best to best Les Bleues.
“The match will be tough it always is against the French, they can push you to your limits and beyond,” said Head Coach John Herdman. “That’s the exciting part for this group of players, they have to push beyond their current limits to get a result, the last time we met it was a one-nil loss for us and we certainly pushed them hard but it wasn’t enough”.
Canada has played France twice since the London 2012 Olympic Bronze medal match, both times in France, recording a 1:1 draw in Nice in 2013 and a 0:1 loss in Bondoufle last year.
“I think it will be close again,” predicted Herdman after Canada’s 1:0 victory over China PR on Wednesday. “We’ll be carrying some fatigue from the last match which is not different than what they will face at the Olympics, so our players need to be at our best to get a result against a rested France.”
Fans can expect to see Canada trying to disrupt France’s rhythm, the key to success according to Coach Herdman. “If we can do that, with and without the ball that’s where we can win the match, in our last game we kept the French to only 1 shot on target and spoilt their attacking rhythm, but we couldn’t impose our attack on them and that’s where the growth exists for this squad,” he said.
Canada’s focus remains on preparation for the Olympic tournament, beginning 3 August in São Paulo against Australia. Every player on the roster saw the pitch against China PR to ensure the team was match ready for the Olympic group stage, and the France match will provide one last test of the team before the big competition commences.
“Our job is to push this team as hard as we can and whatever happens – win, lose or draw – we’ll learn from it,” Herdman said.
Fans can catch Canada Soccer’s final Road to Rio Women’s International Friendly match against France LIVE via CBC Sports on CBC, Canada’s Olympic Network, on 23 July at 15.00 ET / 12.00 PT with pre-match programming beginning fifteen minutes earlier. The match will also be available via live-streaming at cbcsports.ca and the CBC Sports app for iOS and Android devices. Radio-Canada will also provide French-language coverage via live-streaming at ici.radio-canada.ca.