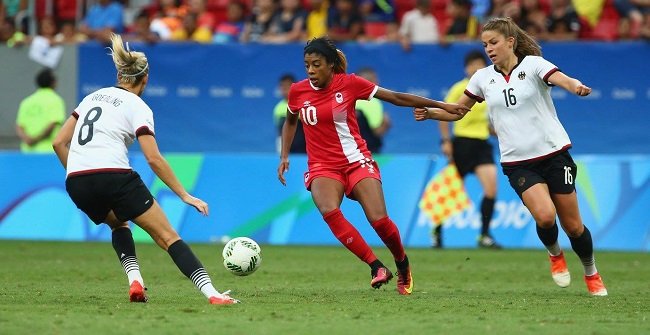 Preview: Canada takes on Germany in Olympic semi-final with gold medal match on the line

With only one match standing between Canada and a shot at the gold medal, fans can expect a determined Canadian side when it takes on Germany in the Rio 2016 Olympic Football Tournament semi-final on Tuesday 16 August in Belo Horizonte, Brazil

Canada is undefeated coming into the semi-final match, having swept its three group stage matches and eliminating France in the quarter-final. With seven goals scored and only two goals against, Canada has shown the competition, and the world, it is here in Brazil to compete at the highest level.

From more than 100 nations, only four nations remain in the final competition. Success in the semi-final will come down to more than just skill – it will take resilience, determination, or what Canadians like to call grit.

“It comes down to a bit of willpower after four or five matches in a tournament and I think we have an abundance of that,” said Canada’s Head Coach John Herdman. “That’s the reality of these tournaments, the games come thick and fast, and you have to pour your everything into matches when you’ve played your heart out already. If we grind this out, we are on the podium – it’s that simple for us.”

Canada has certainly shown Canadian grit in this Olympic tournament, having blanked the FIFA Women’s World ranked third (France) and fifth (Australia) teams. When Canada beat the world’s second ranked Germany in the third group stage match, it made Canadian history and propelled the team into the spotlight as a medal contender.

But even with an unbeaten record, the team knows the hard work is not done.

As for Herdman, he has challenged the team to push the attacking side of Canada’s game.

“We have thrived on defending and transitional plays, but I think that can only take you so far in a tournament,” he said. “At some point we really do have to bring more of an attacking edge, and that time is now.”

Going into Tuesday’s semi-final, Herdman expects Germany will come out hard from the start and try to put Canada on its back heel, something they weren’t able to do against Canada in the group stage.

“I think they will start (Alexandra) Popp, so there won’t be any players on the bench that shouldn’t be,” he said. “I always say the Germans get stronger as the tournaments go on and we will have to match that in this game.”

With four wins at Rio 2016, Canada have now posted a record of 14 wins and four losses in 18 international matches this calendar year. Since finishing sixth at last year’s FIFA Women’s World Cup Canada 2015™, Canada have posted a record of 16-0-6 in 22 matches, including a second-place finish at the CONCACAF Women’s Olympic Football Qualifiers and a first-place finish at the Algarve Cup.

Canada are the only one of four Olympic semi-finalists returning for a chance to win a medal four years after winning a bronze medal at the London 2012 Women’s Olympic Football Tournament.