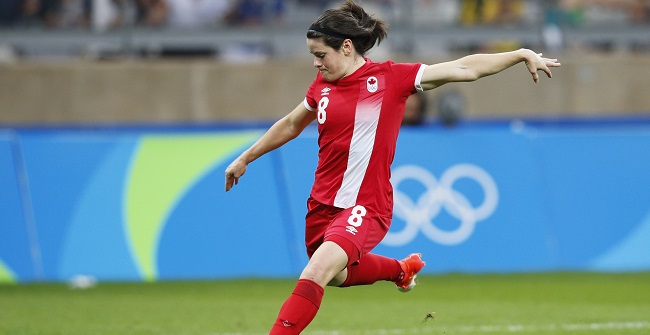 The Rio 2016 Olympic Football Tournament bronze medal is on the line when Canada face host country Brazil on Friday, 19 August at 13:00 local (Noon ET/09:00 PT) in Sao Paulo, Brazil. Canada will be heading into the match looking to make history and defend their London 2012 podium spot, while Brazil will be aiming to bring home a medal for their home crowd.

“Brazil will have a home crowd that will be willing them on all the way,” said Canada’s Head Coach John Herdman. “It will be a pretty hostile crowd for Canada, we know that, but we also know what kind of pressure they will be under having hosted a home FIFA Women’s World Cup.”

In addition to battling the hosts in front of a boisterous crowd, Canada will have to contend with one of the greatest defending units in the women’s game. Brazil only conceded one goal in live play at last summer’s FIFA Women’s World Cup Canada 2015™, a feat they repeated this year by only conceding one goal against Sweden in the group stage. Sweden went on to defeat Brazil in the semi-final on penalty kicks.

“Coming up against Brazil, we know defensively they are very resolute,” said Herdman. “This will be one of our toughest tests. When we get our chances in the game, we have to take them. We’ll be asking our forwards to press and create opportunities, and we’ll be pushing to convert when we get set plays.”

With two highly effective defensive teams clashing in a match with so much on the line, both teams will be looking to take advantage of the others’ mistakes.

“I genuinely believe the game will be won and lost in a transitional moment or set play,” said Herdman. “This is quite an evenly matched bronze medal contest. I think Brazil have got a fantastic forward line, so we will have to be at our best to keep them at bay.”

Canada may be coming into the match more rested, given Brazil has gone into extra time in their last two matches, but even with fewer accumulated minutes on the Canadian side, Herdman knows Brazil will be a threat early in the match on Friday.

“The key to success for Canada will be riding the waves the Brazilians will bring early in the game,” said Herdman. “Whenever we have played Brazil they have been able to start a game faster than most teams. We have to grit it out for a period early in the game and then push them hard so we test their resolve and whether mentally and physically they are capable of pushing through to the podium.”

Through five matches at Rio 2016, Canada have posted four wins and one loss. After wins over Australia (2:0), Zimbabwe (3:1), and Germany (2:1) in the group phase, they defeated France 1:0 in the quarter-finals, before falling to Germany in the semi-final.

Canada’s quarter-final victory equaled a Canada Soccer record of 14 international wins on the calendar year. A win Friday would give Canada a historic second consecutive bronze medal, and also establish a new record for annual victories.

“We experienced an incredible moment in London, without doubt the greatest of my career,” added Rhian Wilkinson. “But this team is even stronger than our side four years ago. I’m convinced of that. We have to and we will do everything to win another bronze medal and relive that experience.”