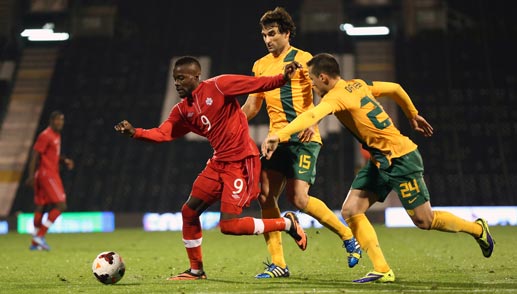 Canada falls 0:3 to Australia in their Men’s International Friendly at Craven Cottage in London, ENG on Tuesday night.

If it wasn’t for a few top-quality saves by Australian goalkeeper Mitchell Langerak in the first half, it may have been a different story. But an early goal by Josh Kennedy and two more in the second half by Dario Vidosic and Matthew Leckie condemned Canada to a 0:3 defeat to Australia in their Men’s International Friendly at Craven Cottage in London, ENG on Tuesday night.

Canada conceded just half a minute into the first half when Kennedy headed in an early cross but responded well and could have notched a goal or two in the first half.

Not long after conceding, Simeon Jackson had a half volley saved by Langerak. The Australian goalkeeper dove to his right to stop the shot and was fortunate that the ball struck the post and flew out.

“I think we got the balls in some areas and he made some good saves,” said veteran Dwayne De Rosario, who captained the team and earned his 75th cap. “It was a little unlucky but the main thing was we were starting to push and take some initiative and find some pokes at goal. That’s the positive we can take from that.”

Langerak denied Canada again on the half-hour mark when Tosaint Ricketts got a powerful header off a David Edgar cross but some fine reflexes from Langerak allowed him to push the shot over for a corner kick.

In the second half, younger players replaced much of the veteran talent and an Australian team with something to prove scored in the 52nd minute on a redirection and in the 79th minute on a header to put the game beyond all doubt.

“It’s necessary with the young players because we need to give them international experience. This is the problem for us.”