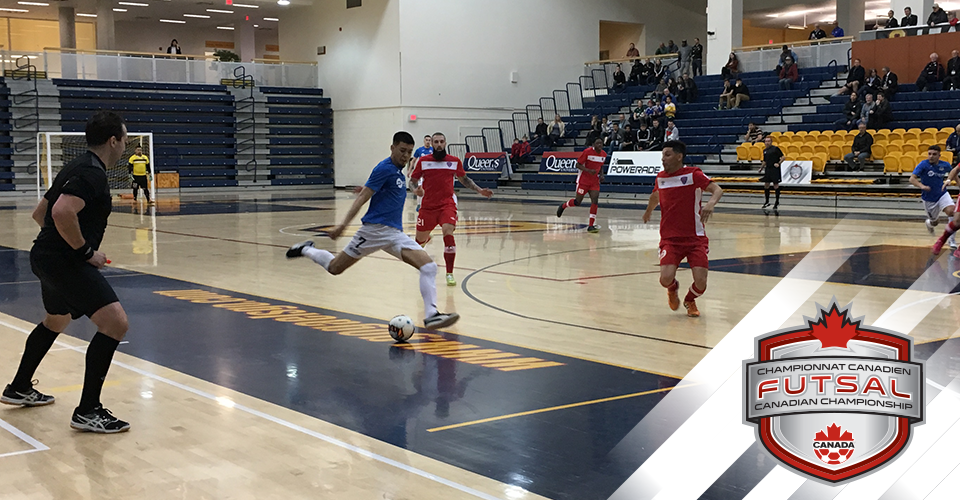 Quebec’s futsal champions won the first match of the 2017 Futsal Canadian Championship from Queen’s University in Kingston, ON 21 April 2017.

The nine goals scored by Sporting Outlaws FC is a Futsal Canadian Championship record, as was the five-goal performance by the Outlaws’ Diyaeddine Abzi.

Ontario’s Futsal Club Toronto will have a chance to secure their first points of the tournament against Saskatchewan debutants Saskatoon Olimpia SK FC. That match will be live on CanadaSoccerTV (www.youtube.com/c/canadasoccertv/live) Saturday 22 April at 11:00 a.m. ET., followed by Saskatchewan vs. Quebec in the final round robin match at 6:00 p.m. ET.

In addition to the Championship, Saturday afternoon will feature a Youth Futsal Clinic with Canada Soccer’s Futsal Head Coach Kyt Selaidopoulos. The clinic will include participants from the local Kingston area.

This will mark the first time that Kingston has hosted one of Canada Soccer’s national competitions. Previous editions of the Futsal Canadian Championship were played in Montréal, Québec (2015) and Oshawa, Ontario (2016).