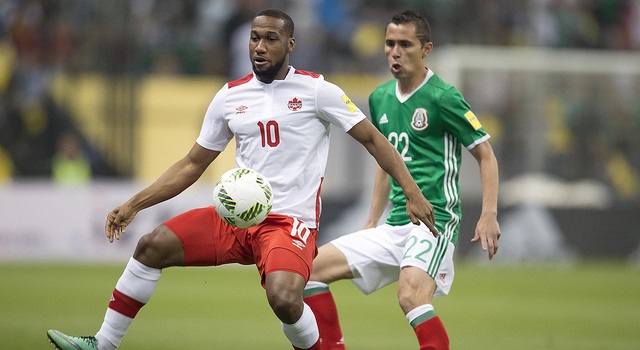 Race to Russia tightens after Canada MNT falls at Azteca

The race to Russia has tightened after Mexico clinched a spot in the CONCACAF “Hex” with a 2:0 Tuesday home win over Canada in the CONCACAF semi-final stage. Honduras, Canada, and El Salvador all remain in striking distance of the group’s second spot, with matches in September 2016 to decide which Group A nation joins Mexico in the six-nation, CONCACAF 2016-17 Final Stage.

Mexico scored twice in the first half to the delight of a packed Azteca crowd, with Andres Guardado scoring on a penalty and Juan Manuel Corona scored on the final play of the first 45 minutes. Canada then put forth a collective and positive performance for the second half, closing down the Mexico offence.

Two nations from each of three groups will advance to the CONCACAF Final Round, otherwise known as the “Hex”. In Group B, Costa Rica is in first place with 10 points (+5), Panama is in second place with seven points (+2), Jamaica is in third place with four points (-4), and Haiti is in fourth place with one point (-3). In Group C, Trinidad and Tobago are in first place (10 points / +8), USA are in second place (7 points / +7), and Guatemala are in third place (6 points / +1). Last-place St. Vincent & the Grenadines (0 points / -16) have been eliminated.

Canada are amongst the 11 CONCACAF nations in the hunt for a spot at the 2018 FIFA World Cup Russia™. The remaining nations have been split into three groups for the continent’s 2015-2016 semi-final stage. The top-two nations in each group will advance to the final round in 2017, from which three nations qualify for Russia 2018 and the fourth team advances to an intercontinental playoff.

Following these two matches in March, Canada now looks ahead to an away match against Honduras on 2 September and a home match against El Salvador on 6 September (location TBD).