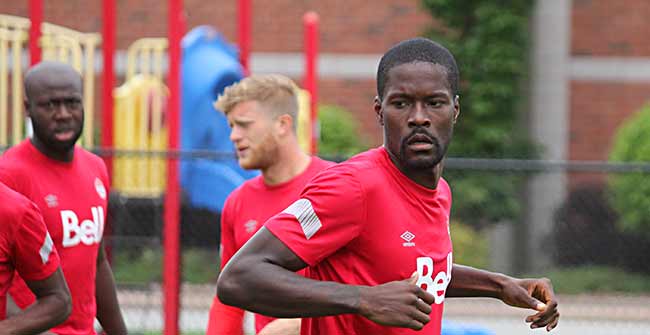 This past offseason, Ricketts moved from Bucaspor in Turkey to Hapeol Haifa, a team that plays in northern Israel.

Like much of the world, Tosaint Rickets was watching as the conflict between Israel and Palestine roared on. But unlike most, Ricketts was watching from much closer to the situation.

This past offseason, Ricketts moved from Bucaspor in Turkey to Hapeol Haifa, a team that plays in northern Israel. Far from being scared away, Ricketts has found some familiarity with his move.

“The most experience of (the conflict) I had was watching it on (television). Once I got there I didn’t feel anything or hear anything. I’m up north so it didn’t reach that far,” said Ricketts after the first of two training sessions on Wednesday in Alliston, north of Toronto as Canada’s Men’s National Team prepares for Tuesday’s men’s international friendly against CONCACAF foes Jamaica.

“It was a smooth transition. I have a couple friends from university that told me about the culture and I settled in pretty fast.”

While the league season was delayed due to conflict in Gaza, there was some action in Cup play and Ricketts has excelled early in netting a few goals. It’s a run of form that’s continued from last May when he scored in Canada’s 1:1 draw with Moldova and he’s hoping that continues as Canada gets set to take on Jamaica next Tuesday.

“It’s always good to come into the national team getting some results and doing well,” said Ricketts.

“We usually perform well at BMO, at home. We just want to show the passion and the progress of what Benito (Floro) has applied to us and we want to show it to the fans that things are going in the right direction.”

After the game, Ricketts heads back to Israel for the start of the new league season.

Tuesday’s game will be the first time that Canada’s Men’s National Team has played in Canada under Head Coach Benito Floro. It is also the first time the team has had the chance to test themselves against CONCACAF opposition with Floro at the helm.