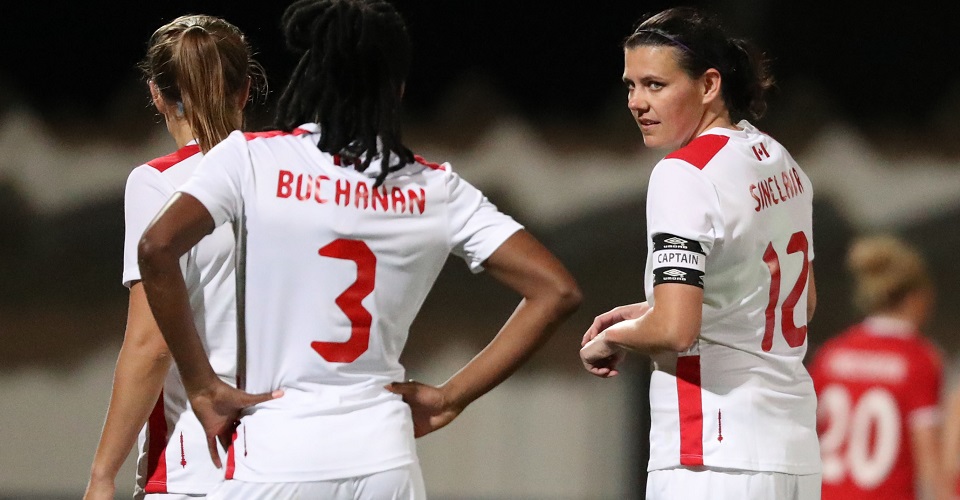 Canada Soccer’s Women’s National Team are heading to Europe to play tier one opponents Sweden 6 April 2017 in Trelleborg, Sweden, and Germany 9 April 2017 in Erfurt, Germany. The two match series pits Canada’s Olympic Bronze Medalists against the Rio 2016 Olympic Games Silver and Gold Medalists, respectively.
“These are two big matches, you don’t often get the opportunity to play both the Olympic Gold and Silver medalist in back-to-back matches,” said Head Coach John Herdman. “Both teams are favourites for the European Championships later this summer and we know they will be in prime condition and getting ready to peak for the competition. The matches are going to be tough, but this is what we are looking for to test our current group and to identify our gaps in the build up to the FIFA Women’s World Cup France 2019”.
Canada Soccer’s Women’s National Team have recent history playing Germany, including two games at last summer’s Olympic Games, but it hasn’t played Sweden since a two-match series in 2014 in Los Angeles that resulted in a 1-0 win for Canada, followed by a 1-1 draw days later.
“Sweden are an excellent counter attacking side with a handful of truly world class players. At the Olympics, they showed they have the resolve to beat teams like Brazil and the USA, and with the European Championships just around the corner we know they will be very strong,” said Herdman. “Another result against Germany would be fantastic for our team, achieving our first-ever win against them at the Olympics was a real confidence builder, doing it again will be a huge step for this young team.”
Canada Soccer’s roster for the matches against Sweden and Germany includes 16 members of the 2016 Rio Olympic Bronze Medal Team, and six additions to the squad, most of whom played in Canada’s recent silver medal performance at the 2017 Algarve Cup. The young roster has an average age of 22.4 years old, and includes seven teenagers.
“We’ve made some changes to our roster since last year, adding some new players and saying goodbye to others, so this two-game series will be a real test of how our squad comes together against tier one competition,” said Herdman. “We’re confident this squad will be competitive against these two teams, but it’s a young team that’s still building the experience, game smarts and physicality required to be a genuine number one contender. We are starting to fill the experience void left by our retired veterans and will use these matches to keep providing our youth with opportunities.”
Both Germany and Sweden recently rose in the FIFA rankings, with Germany overcoming the USA to take the coveted number one spot in women’s football. Sweden is tied for sixth with Japan, while Canada sits in the fifth-place position.

“We want to take this team to number one in the world,” said Herdman. “The only way we are going to be able to do that is to play these tough matches and continually learn from them. Canada Soccer has made incredible strides over the last five years, earning back-to-back podium finishes, and our goal continues to be reaching the number one spot.”