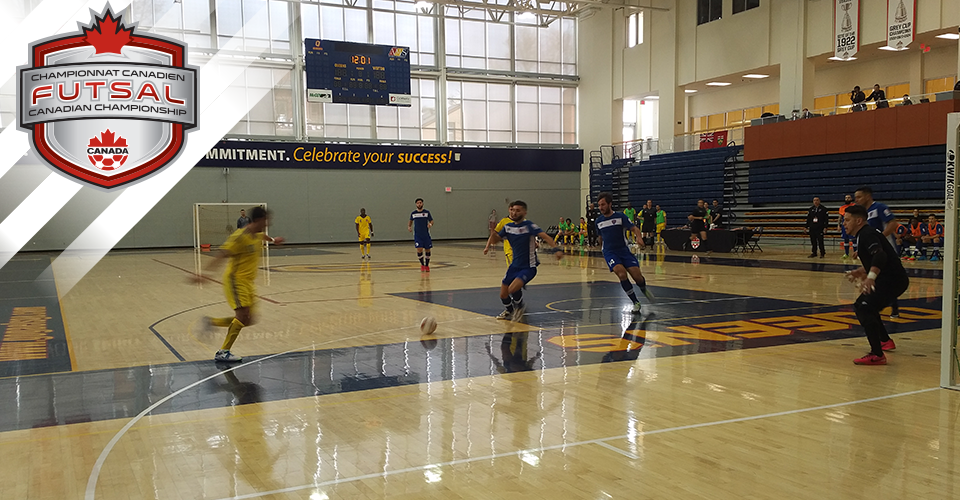 Futsal Canadian Championship debutants Saskatoon Olimpia SK FC came back from down 4:1 at halftime to draw Futsal Club Toronto 5:5 in the second round robin match from Kingston, ON.
The inaugural champions from Ontario, playing their second match in as many days now await the result of the second match of the day to determine whether they qualify for the Grand Final.
Kitchener ON’s Fitzroy Christey, a former Canada Soccer Futsal National Team player, put Saskatchewan ahead 5:4 late in the second half before current National Team player Eduardo Juaregi knotted it to keep Toronto in the running for the Grand Final.
Montréal Sporting Outlaws FC, who defeated Fustal Club Toronto 9:3 in the opening match, now control their own fate as they prepare for the 6:00 p.m. ET final round robin match.

In addition to the Championship, Saturday afternoon will feature a Youth Futsal Clinic with Canada Soccer’s Futsal Head Coach Kyt Selaidopoulos. The clinic will include participants from the local Kingston area.
This will mark the first time that Kingston has hosted one of Canada Soccer’s national competitions. Previous editions of the Futsal Canadian Championship were played in Montréal, Québec (2015) and Oshawa, Ontario (2016).
From the first two editions of the Futsal Canadian Championship, Futsal Club Toronto were national champions in 2015 and Toronto United Futsal were national champions in 2016.
Futsal is a unique, fast-paced indoor sport played across Canada and around the world. Canada Soccer is committed to the growth and promotion of the game. At the elite club level, Canada Soccer supports domestic competition through the annual Futsal Canadian Championship.
Canada Soccer is committed to supporting international playing opportunities in futsal through the National Futsal Team with international participation in the CONCACAF Futsal Championship and the FIFA Futsal World Cup.