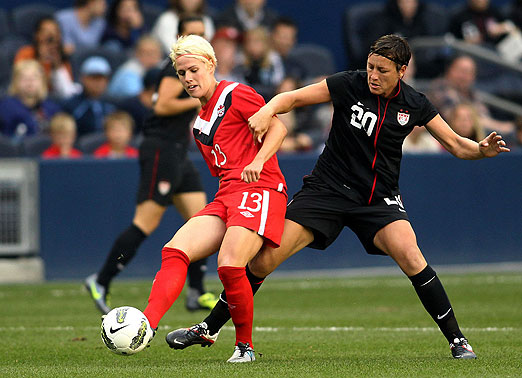 Sophie Schmidt has made her 75th career international appearance for Canada on Thursday 19 January 2012. Schmidt was part of head coach John Herdman’s starting XI for the Canada-Haiti opening match at the 2012 CONCACAF Women’s Olympic Qualifying tournament in Vancouver. Schmidt is the 15th player to reach the milestone.

Schmidt is now in her eighth season with the national team. A CONCACAF champion in 2010, she made her international “A” debut back on 19 April 2005 at age 16. Today still on 23 years young, she is the fourth-youngest player to reach the milestone (behind Kara Lang, Brittany Timko and Christine Sinclair).

In tournament play, Schmidt has represented Canada at two FIFA Women’s World Cups (China 2007 and Germany 2011), one Women’s Olympic Football Tournament (Beijing 2008), four CONCACAF championships (including gold in 2010), and one Pan American Games (gold at Guadalajara 2011). At the youth level, she represented Canada at two FIFA U-20 Women’s World Cups (Thailand 2004 and Russia 2006) and two CONCACAF Women’s Under-20 Championships (silver in 2006 and gold in 2008).

Born in Winnipeg, Schmidt actually grew up in Abbotsford, BC where she started playing soccer. She was 14 years old when she made her debut in the Canadian youth program in 2003 with coach Bryan Rosenfeld. She graduated from the University of Portland in December 2010.