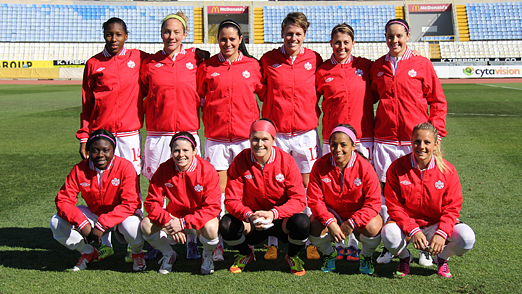 Sophie Schmidt scored a second-minute winner on the day she made her 100th appearance for Canada.

Canada started its campaign at the 2013 Cyprus Women’s Cup with 2:0 win over Switzerland at the GSZ Stadium in Larnaka, Cyprus on Wednesday 6 March, 2013.

Sophie Schmidt scored a second-minute winner on the day she made her 100th appearance for Canada.

Diana Matheson sealed the win with a second goal in the 79th minute.

“It was good to get a win in our opening match of the tournament,” said Head Coach John Herdman after the game.

“We scored early which gave us the advantage – but the Swiss did well during spells of the match so we know we have some things to improve on as well.”

Canada stunned Switzerland when an early attack led to Matheson playing a pass to Schmidt at the edge of the area. Schmidt, Canada’s captain on the day, made no mistake in placing the finish in the top right corner in the second minute.

The Swiss attempted to mount a comeback early in the second half – but the game was ultimately killed off in the 79th minute when Matheson ran clear through on goal and chipped the keeper to make it two-nil.

The win takes Canada to the top of Group B.