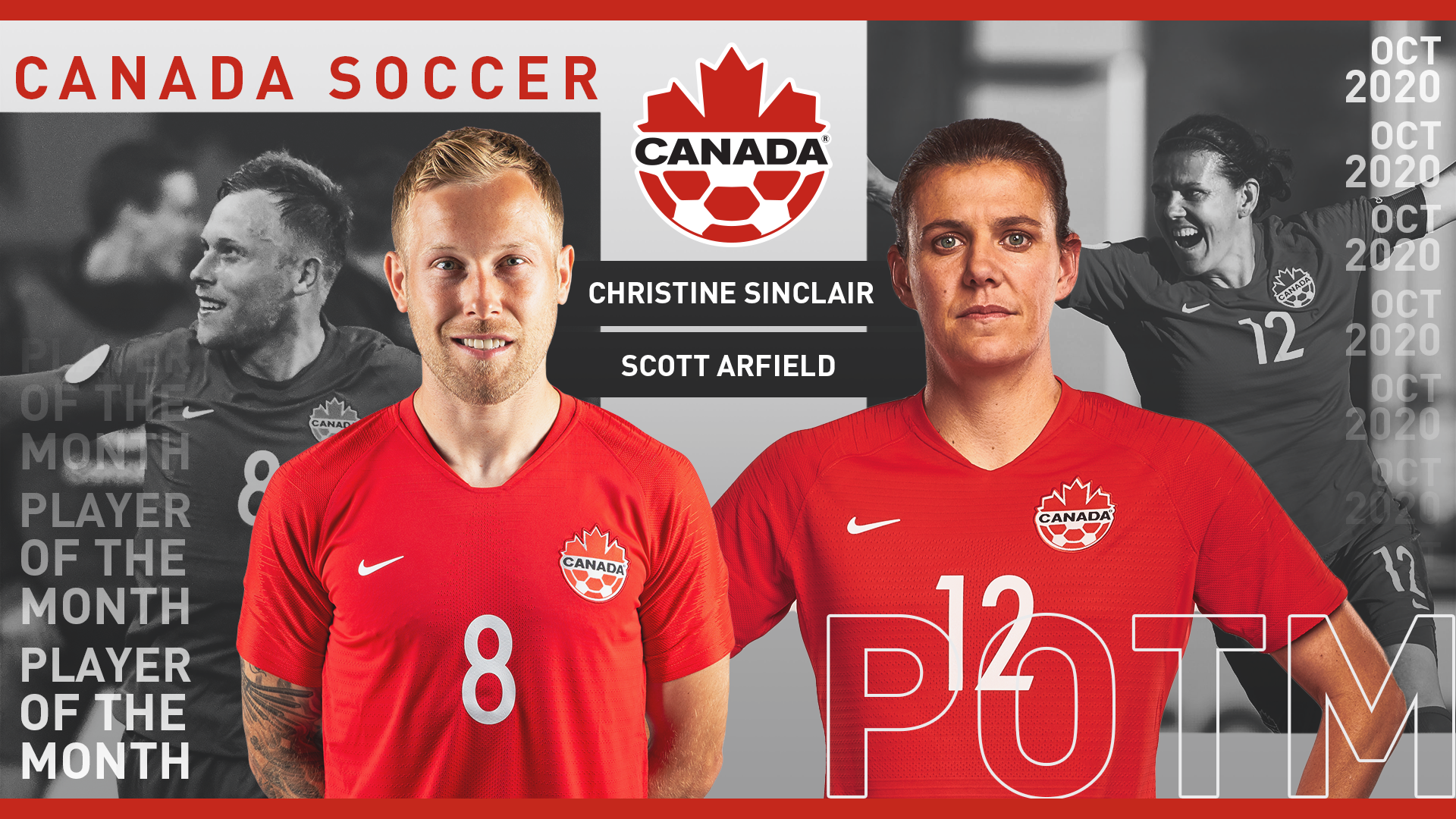 Among those players who receive special mention in October, Canada Soccer applauds Milan Borjan’s stand against cyberbullying from a rival club director in the Serbian SuperLiga. Captain Borjan and his club Red Star Belgrade (FK Crvena Zvezda) are currently in first place in the Serbian SuperLiga and have so far collected three points in the group phase of 2020-21 UEFA Europa League.

Arfield and Borjan are two of the five Canadians currently taking part in 2020-21 UEFA men’s club competitions, with Arfield, Borjan and Jonathan David in UEFA Europa League and both Alphonso Davies and Manjrekar James in UEFA Champions League. The 2020-21 UEFA Women’s Champions League season starts in November with qualifying followed by the Round of 32 in December.

In October, Arfield and Rangers won their three league matches in Scotland (including a 2:0 away victory over Celtic) and their three wins in Europe. Arfield scored for the Rangers in their UEFA Europa League Qualifying match back on 1 October and has since kept the club as joint-leaders in Group D with perfect six points from two matches.

Sinclair helped Portland Thorns FC win the NWSL Fall Series Verizon Community Shield with an unbeaten record of three wins and one draw. Captain Sinclair was pivotal in both October matches, scoring the tying goal against Utah Royals on 3 October and then both goals in a 2:1 victory that sealed the title on 10 October. It was Sinclair’s fourth title in eight years with Portland Thorns FC, having previously won the regular season’s NWSL Shield in 2016 as well as the NWSL Championship in both 2013 and 2017.

With six goals across four matches, Sinclair was the league’s top scorer in the NWSL Fall Series. Since 2013 when the league was inaugurated as an important legacy to the FIFA Women’s World Cup Canada 2015™ through a joint effort with the Mexican Football Federation and US Soccer, Sinclair has been the league’s joint second-best scorer across all competitions with 58 goals in 147 matches.

Also in North America during the month of October, Toronto FC have kept near the top of the Major League Soccer standings while Forge FC Hamilton have reached the Round of 16 in Concacaf League. Both teams will face each other in the 2020 Canadian Championship Final, with the date and location yet to be announced.

In MLS action, young Tajon Buchanan of New England Revolution remains the only Canadian player to feature in every match this season, while Samuel Piette recently made his 100th appearance for the Impact de Montréal. James Pantemis (Montréal), Ralph Priso and Jahkeele Marshall-Rutty (both Toronto) all made their MLS debuts in October, with Marshall-Rutty in fact the youngest player in club history. Out west, Lucas Cavallini scored three times for Vancouver Whitecaps FC while goalkeeper Dayne St. Clair posted three clean sheets for Minnesota United FC.

In women’s leagues in Europe, both Latifah Abdu and Paige Culver recently made their pro debuts in France (Championnat de France D1). Évelyne Viens scored four goals for Paris FC (including a hat trick) while Jordyn Huitema scored her first goal of the season with Paris Saint-Germain, who along with Ashley Lawrence have their team in second place in the league standings. Centre back Kadeisha Buchanan, who scored twice in October, has helped unbeaten FCF Olympique Lyonnais to remain at the top of the league standings in France.