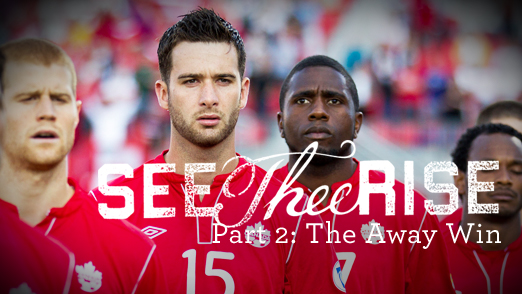 SeeTheeRise: Part 2, The Away Win

Part 2 of the SeeTheeRise documentary series

CanadaSoccerTV has released Part 2, The Away Win of the seven-part SeeTheeRise documentary series.

The latest release profiles Canada’s successful trip to Cuba in June where the team earned a 1:0 win to open the 3rd round of FIFA World Cup™ Qualifiers.

Canada defeated Cuba on a sweltering day in Havana courtesy of a second-half goal by Olivier Occean. The victory was cheered on by hundreds of Canadian fans who made the trek to Cuba to support the team on the road to Brazil 2014™.

SeeTheeRise: Part 2, The Away Win

Tickets to Canada’s next two home matches in FIFA World Cup Qualifiers are available via Ticketmaster.ca or by phone at 1.855.570.7500, with full information available at CanadaSoccer.com/seetheerise. Group discounts are available via [email protected] or 613.237.7678. Following the Friday 7 September match against Panama at BMO Field, Canada’s next home match is Friday 12 October against Cuba. Canada’s remaining away dates are Tuesday 11 September in Panama and Tuesday 16 October in Honduras.