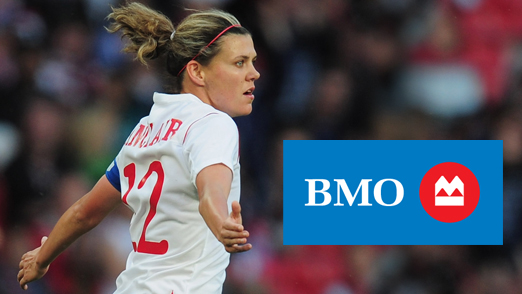 Captain Sinclair is now a 10-time winner of the Canadian award.

The Canadian Soccer Association announced that Christine Sinclair is the female selection for the 2012 BMO Canadian Players of the Year award. Sinclair of Burnaby, BC was honoured in a vote shared by Canadian media (50%) and Canadian coaches (50%).

Sinclair is one of two winners of the 2012 BMO Canadian Players of the Year award. While Sinclair is announced a winner on Tuesday 11 December, her co-winner (a male selection) will be announced on Wednesday 12 December.

“Her instrumental role on the international playing field has brought an overwhelming sense of national pride to Canadian soccer fans, so we are proud to present Christine Sinclair with the 2012 BMO Canadian Players of the Year Award,” said Justine Fedak, Senior Vice-President, Branding, Advertising & Sponsorships, BMO Financial Group. “Christine Sinclair has shown that she is a leader at the national level, ranking as one of the highest scorers in women’s international soccer history. As the Bank of Soccer in Canada, we are honoured to bestow this award on someone who exemplifies the quality of player this award was created to recognize.”

The highlight of Sinclair’s 2012 season was the bronze medal victory at the London 2012 Women’s Olympic Football Tournament. It marked the highest finish for a Canadian team at one of the two biggest global women’s “A” international football tournaments. It also marked the first time that Canada won an Olympic medal in any summer team sport since 1936.

Sinclair set a national record with 23 goals in 22 matches in 2012, seven more than her previous record in 2007. With those 23 goals plus six assists, she was directly involved in nearly 66% of Canada’s 44 goals. She earned Player of the Match honours five times, including the night she scored a memorable hat trick night at Old Trafford in Manchester at the London 2012 Olympics. She won Canada Soccer Player of the Month honours in May and August.

Sinclair is now a 10-time winner of the BMO Canadian Players of the Year award. In 13 seasons with the national team, she has led Canada in scoring 12 times. She ranks third all-time amongst women’s footballers with 143 international “A” goals.