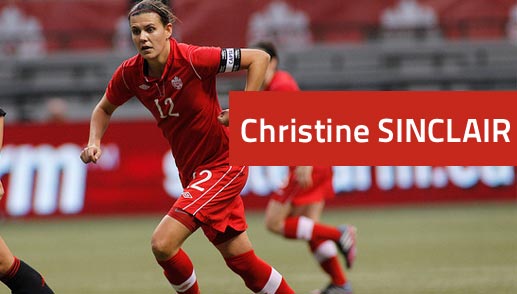 Canada Soccer announced that Christine Sinclair is the female selection for the 2013 BMO Canadian Player of the Year award. The Portland Thorns FC captain was honoured in a vote shared by Canadian media (50%) and Canadian coaches and clubs (50%).

Sinclair of Burnaby, BC is one of two winners of the 2013 BMO Canadian Players of the Year award. Sinclair shares the 2013 award with Portland Timbers captain Will Johnson.

In 2013, Sinclair led the Portland Thorns to the NWSL championship, in fact book ending the professional season with both the team’s first and final goals of the winning campaign. She earned NWSL Player of the Month honours in April. The 30-year old captain scored eight goals in 20 matches.

Sinclair has now won professional championships in each of her three past league seasons: 2010 with FC Gold Pride, 2011 with Western New York Flash, and 2013 with Portland Thorns FC.

At the international level, Sinclair participated in her 14th season with Canada, most recently making her 200th career appearance on Thursday 12 December. She earned player-of-the-match honours in October in a 3:0 win over Korea Republic.

Also in 2013, Sinclair was again a finalist for the FIFA Women’s World Player of the Year award. She was also honoured on Canada’s Walk of Fame

Sinclair is now an 11-time winner of the Canadian Players of the Year award. Runners up included Diana Matheson (second), Erin McLeod (third) and Desiree Scott (fourth). The list of previous award winners is identified below.

“BMO is proud to recognize players such as Christine Sinclair, whose impact on the landscape of Canadian soccer has proven to be outstanding and inspirational,” said Justine Fedak, Senior Vice President, Brand Advertising, Sponsorships & Merchandising, BMO Financial Group. “The BMO Canadian Players of the Year Award serves to highlight exemplary performance at a professional level, attracting young athletes to the sport at the grassroots level. We congratulate Christine on her tremendous accomplishment.”

BMO CANADIAN PLAYERS OF THE YEAR