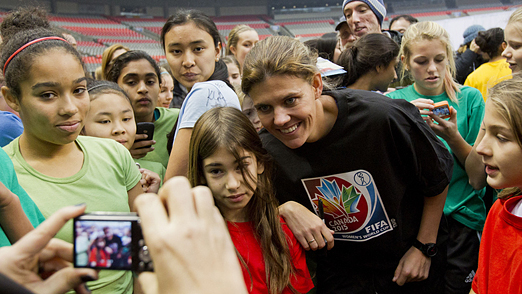 The list, announced by CAAWS, recognizes 20 top leaders in sport and physical activity across Canada.

Canada’s Women’s National Team captain Christine Sinclair is one of the 20 outstanding women that have been named by the Canadian Association for the Advancement of Women and Sport and Physical Activity (CAAWS) to the Most Influential Women in Sport and Physical Activity List of 2013. CAAWS publishes its Most Influential Women List annually to celebrate and highlight Canadian leaders who influenced sport and physical activity in Canada and on the international stage.

“This is the 12th edition of the CAAWS Most Influential Women List and it is great to see the number of strong leaders who contribute so much to our country and on the international scene,” said CAAWS Executive Director Karin Lofstrom (Ottawa, Ontario). “Our goal is to assist in raising the profile of these leaders as well as celebrate women who make a significant contribution to physical activity through to high performance.”

Sinclair has been named to the CAAWS Most Influential Women List 3 previous times (when Canada’s Women’s National Team was named as a group). This is the first time she is named in her own right.

The 2013 List includes athletes, officials, coaches, professors, administrators and volunteers. A few of the women have been named to the List several times, such as Anne Merklinger (Own the Podium) Caroline Assalian (Canadian Olympic Committee); while some are newcomers such as Monique Levebvre (AlterGo), Michelle Stilwell (Paralympian), Carol Huynh (Olympian) and Jane Riddell (GoodLife Fitness Clubs Inc.).

THE CAAWS MOST INFLUENTIAL WOMEN LIST FOR 2013 IS (alphabetical order):

The final List was compiled by a CAAWS selection panel, from both public nominations and from contributions from knowledgeable sport and physical activity leaders. The panel reviewed the submissions and based its decision on accomplishment and scope of activities in the 2013 calendar year. Past Lists can be found at http://www.caaws.ca/influentialwomen/e/past_Lists.htm