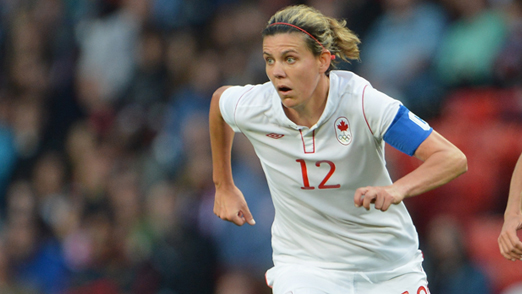 Sinclair set for return in second match at Cyprus Cup

Canadian captain will be eligible for return in Friday’s match against Finland.

Captain Christine Sinclair will be eligible to make her return to competitive action on Friday when Canada takes on Finland at the GSP Stadium in Nicosia, Cyrpus (17.30 local; 10.30 ET / 07.30 PT) in the team’s second match at the 2013 Cyprus Women’s Cup.

Fans will be able to follow the match live on Twitter: @CanadaSoccerEN. Complete pre and post-match video coverage, as well as full match highlights, will be available on CanadaSoccerTV.

“I hope I’m fit,” joked Sinclair in an interview with CanadaSoccerTV on Thursday.

“The last time I suited up with Canada we won an Olympic medal. I’m looking forward to the game.”

Sinclair, who will be eligible for selection following the end of a four-match FIFA suspension, stated that she has been impressed by how Canada’s young attackers have performed in her absence – but that she is keen to get back into the team to assist their development.

“The team has performed very well in China (January 2013) and in the first game at the Cyprus Cup.

“I remember how intimidated I was during my first half-dozen games with the national team – the young players have done very well.

“Hopefully I can come into the line-up and help them even more.”

Sinclair also admits that she has been rather amused by the amount of media fanfare that her absence from the team has attracted.

Cracking a shy grin, she stated that “missing a couple of games in January and February of 2013 ultimately has not been a big deal.”

Canada will enter the second group match at the Cyprus Cup in first place in Group B following a 2:0 win over Switzerland on the opening day of the tournament. Finland defeated the Netherlands 2:1 in the group’s other match on the first day of the competition.

Following the game against Finland, the Canadians will close out group play with a fixture against the Netherlands on Monday 11 March.

The top team from Group A will square-off against the top team in Group B in the Cyprus Cup final on Wednesday 13 March.