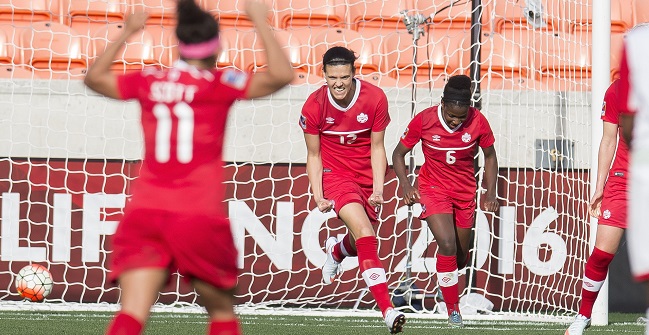 Canada’s Women’s National Team all but secured a spot in the CONCACAF Women’s Olympic Qualifying Championship Texas 2016 semi-final with its 6-0 win over Trinidad and Tobago, the team deemed the biggest threat to Canada in Group B. Only a loss to Guatemala on the 16th combined with a double-digit victory by Trinidad and Tobago over Guyana could knock Canada out of the group stage.

Diana Matheson, sporting the captain’s armband, opened scoring in the 24th minute with a brilliant run to the net, finishing with a whizzing boot past Trinidad and Tobago’s keeper. Melissa Tancredi added to the scoresheet after driving to the net and getting her head on the ball with a minute left in the first half.

“I was happy to score the opening goal, but I think we were playing pretty well before that and we just needed a goal to settle us down, so it was good timing and I think we settled in a bit after that,” said Matheson.

“It’s great for us,” said Herdman. “It was a bit of a statement against a team like Trinidad, which teams in this tournament have struggled against in the past. We really wanted to show that we’re here to play and also to get our berth into the semi-final, which is the most important thing.”

Acknowledging Trinidad and Tobago as a team that had a great run in 2014 with big matches against teams like the USA, Herdman spoke about going into the match intent on getting a result.

“We were just ruthless tonight,” said Herdman. “That was the mindset going in. We knew what they were going to try and do, they were looking to try and press from the start, with an offensive four-four-two line up, and they were going to go for it. I think they competed, they did whatever they could, but when you look at some of the movement of these players and the confidence they have; Canada is in a good space at the minute.”

Similarly, Sinclair expressed her pleasure with Canada’s performance, and attaining goals the group has set for themselves as they look to repeat a podium performance at this Summer’s Olympic Games.

“Heading into the group stage this was our goal, to win our first two games handily,” she said. “We’ve got great depth on this team and we’ll be able to rest some players through all three games, so come the semi-finals, whoever we play, we will be as fresh as possible.”

In customary Sinclair fashion, she was pleased but modest when asked about surpassing her childhood idol Mia Hamm in goals.

“It’s an incredible honour,” said Sinclair after the match. “But it’s so nice to get it off my back. I had a couple of games without scoring a goal and it was weighing on me a little bit, so it’s nice to get it out of the way and allow myself, and the team, to focus on our goal for this tournament, which is to qualify for the Olympics.”

Diana Matheson, who has played alongside Sinclair since 2004, was more effusive in her appreciation of Sinclair’s accomplishment.

“It’s kind of surreal to be able to say I’ve played with her all these years,” said Matheson, reflecting on Sinclair’s milestone goal. “We grew up watching Mia Hamm, and she was just so big and such and amazing player, and now Christine’s passed her and I have no doubt she is going to pass Abby (Wambach) eventually as well. For a country like Canada, that doesn’t play as many games, doesn’t beat teams eight or ten nothing usually, for her to score that many goals over the years is just an incredible accomplishment. It’s pretty unbelievable what she’s done.”