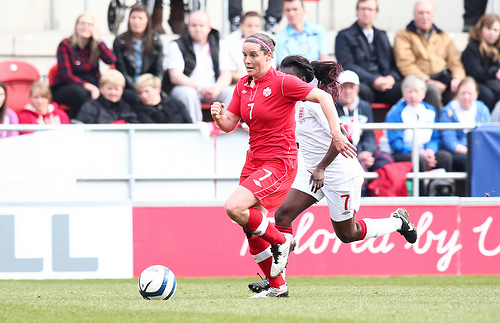 With a bronze medal in the Women’s Olympic Football Tournament at London 2012, a silver medal at the CONCACAF Women’s Olympic Qualifying in 2012 in Vancouver and a gold medal at the Pan American Games, the midfielder Rhian Wilkinson edged Montreal Impact midfielder Patrice Bernier and wheelchair basketball player David Eng to win the Maurice athlete of team sport on the international stage at the 40th Gala Sports Québec Tuesday 30 April in downtown Montreal.

Rhian Wilkinson becomes the second representative of soccer to win two individual awards at Gala Sport Québec since Sonia Denoncourt was elected (three times) Official of the Year in 1994, 1996 and 1999.

In addition, the senior men’s team Royal Sélect de Beauport, Canadian amateur champion in 2012 (Canadian Soccer Association National Club Championships), edged the Shawinigan Cataractes, the Memorial Cup champions, and the Rouge et Or football team from Laval University, Vanier Cup champions, to win the Maurice Team of the Year. Directed by Samir Ghrib, they became the first Quebec team to win the Challenge Trophy since 1998 and the first team from outside Montreal since 1995.