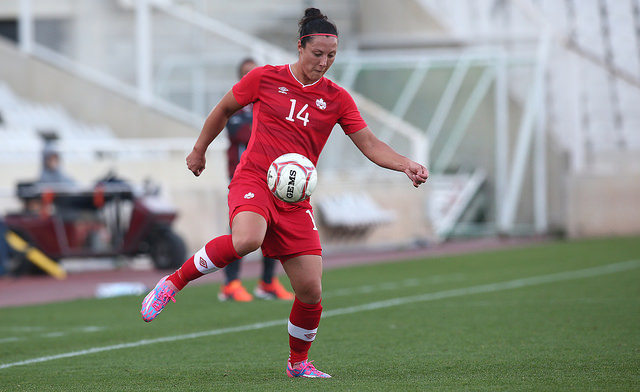 For the first time welcoming a Canadian team back in 28 years, Friday’s Women’s International Friendly against England in Hamilton is a special treat for one of their own as forward Melissa Tancredi is expected to make her 100th appearance for Canada’s Women’s National Team.

“It is pretty special for me, honestly,” Tancredi said after Canada trained at Tim Hortons Field on Thursday afternoon. “For sure it’s going to be an emotional game. I’m going to try and control that but I’m really honoured to be able to do this in front of my family and bring it back here to Hamilton. It’s pretty cool to have the home crowd around us.”

The target, of course, remains the FIFA Women’s World Cup Canada 2015 ™ and Friday’s game will be Canada’s send-off prior to the opening of the tournament on 6 June against China PR at Commonwealth Stadium in Edmonton.

England will be one of the teams to watch in the FIFA Women’s World Cup and Canada has a bit of a score to settle with England having a four-game winning streak over Canada.

So while Canada will be going for the win, the priority will be on perfecting their tournament approach to what they’ll face in the month to come.

“Every game we play to win. Whether you’re a kid or a senior international, you’re going out to try and win a football game,” said Canadian Head Coach John Herdman. “The emphasis (Friday) is employing our strategies and tactics that we’ve been working on against England’s tactics and structures, which are similar to some of the things we’ll be facing in the tournament.”