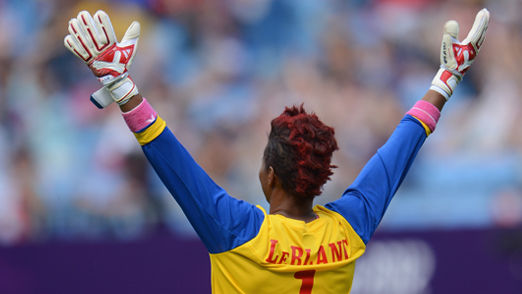 Canada can book place in knock-out stages with win over Sweden on Tuesday.

Canada gained three big points in its second match at the London 2012 Women’s Olympic Football Tournament with Melissa Tancredi and Christine Sinclair leading the way to a 3:0 win over South Africa. Canada remains in third place in Group F with only one match remaining in the group phase, setting the stage for an all-important match against Sweden on Tuesday 31 July.

“We said winning was the only option today,” said Canadian head coach John Herdman. “We hopefully got what we needed. We could have had more, but that’s football sometimes.”

Sweden and Japan remain atop Group F with four points each following a goalless 0:0 draw on Saturday 28 July. In Group E, Brazil and Great Britain are the leaders with six points each, following a Brazil 1:0 win over New Zealand and a Great Britain 3:0 win over Cameroon. In Group G, USA leads with six points followed by France and Korea DPR with three points each. On Saturday, USA won 3:0 over Colombia while France won 5:0 over Korea DPR.

On Tuesday 31 July, Canada will face Sweden while South Africa will face Japan on the last day of the group phase (both matches kick off at  (14.30 local / 09.30 ET / 06.30 PT). Canada’s match will be played in Newcastle, ENG. Canada can still finish first, second or third in its group depending on the Tuesday results.

The top two finishers from each group as well as the top two third-place finishers will qualify for the quarter-final phase. In Group E, either New Zealand (0 points, -2 after two matches) or Cameroon (0 points, -8) will finish in third place. In Group G, either USA (6 points, +5), France (3 points, +3) or Korea DPR (3 points, -3) will finish in third place.