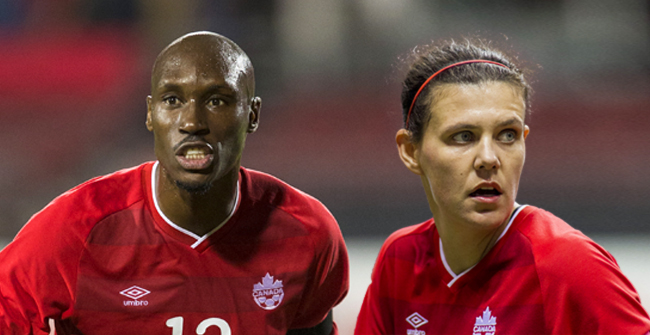 Canada Soccer announced that midfielder Atiba Hutchinson and forward Christine Sinclair are the male and female selections for the 2014 BMO Canadian Players of the Year award. The Besiktas playmaker and Portland Thorns FC captain were honoured in a vote shared by Canadian media (50%) and Canadian coaches and clubs (50%).

“Atiba has been the unheralded leader of our Men’s National Team and one of the top players in the CONCACAF region for years, while Christine has been a remarkably influential figure for women’s football and our sport in general throughout the years. As such, it is with great joy that we honour them with the BMO Canadian Players of the Year award for 2014,” said Victor Montagliani, Canada Soccer President. “With 2015 shaping up to be a crucial year for both our Canadian National Team programs on the international stage, we salute their leadership and thank them for proudly representing our nation, on and off the pitch.”

It’s the third Player of the Year award for Hutchinson of Brampton, ON, who previously won in 2012 and 2010.

In his second year in Turkey’s top-flight, Hutchinson has become a key player for Besiktas as they currently sit in first place in their league. He’s played in every league game this season. His club is also through to the knockout rounds of the UEFA Europa League and earlier this year.

For the National Team, Hutchinson played in four of the five games that Canada’s Men’s National Team was involved in this year. He scored from the penalty spot in the 1:1 draw with Bulgaria in May. But more than that, he showed how important he is to the team as a force in the midfield.

Sinclair has made the award her own as she’s won every year since 2004. The Burnaby, BC, native played in every minute of Canada’s Women’s National Team’s 11 matches this year.

She scored one goal and made her presence felt as she captained the team in action against some of the elite teams in the world.

At the club level, Sinclair scored seven times in her second year with the Portland Thorns FC of the NWSL and set up another goal.

“Hutchinson and Sinclair truly personify the spirit of soccer that we foster and celebrate at BMO. The BMO Canadian Players of the Year award highlights exceptional contributions to the sport at a professional level, while encouraging young athletes at a grassroots level,” said Justine Fedak, Senior Vice President, Brand Advertising, Sponsorship & Merchandising, BMO Financial Group. “We congratulate both of them on their outstanding accomplishment.“